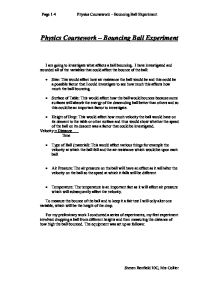 Physics Coursework - Bouncing Ball Experiment I am going to investigate what affects a ball bouncing. I have investigated and recorded all of the variables that could affect the bounce of the ball: * Size: This would affect how air resistance the ball would be and this could be a possible factor that I could investigate to see how much this affects how much the ball bouncing. * Surface of Table: This would affect how the ball would bounces because some surfaces will absorb the energy of the descending ball better than others and so this could be an important factor to investigate. * Height of Drop: This would affect how much velocity the ball would have on its descent to the table or other surface and thus would show whether the speed of the ball on its descent was a factor that could be investigated. Velocity = Distance Time * Type of Ball (material): This would affect various things for example the velocity at which the ball fell and the air resistance which would be upon each ball * Air Pressure: The air pressure on the ball will have an effect as it will alter the velocity on the ball so the speed at which it falls will be different * Temperature: The temperature is an important fact as it will affect air pressure which will subsequently affect the velocity. ...read more.

points fitted the line of best fit with no anomalous results, though when the ball was dropped from 100cm the result was a slight bit more out than I thought it would have been. Overall I thought it was a success, though the measuring could have been more accurately done by a computer, because the ruler might have been slightly tilted to one side while I was measuring, but I had to use the equipment I was given. Since I did each drop each time for every height/temperature I expected to get a few anomalous results, but they were filtered out before I calculated the averages, so it will have not affected my final graph. I believe that the evidence I collected was sufficient enough to create a suitable conclusion. If I were to do this experiment again I would explore using more variables to see what effect they have on the bounce of the ball, or maybe using more than one variable at once. Perhaps if I had been able to use much more accurate equipment my results would have been much more trustworthy and reliable, for example, using a computer to measure the height of the bounce. Page 1-4 Physics Coursework - Bouncing Ball Experiment Steven Benfield 10C, Mrs Collier ...read more.