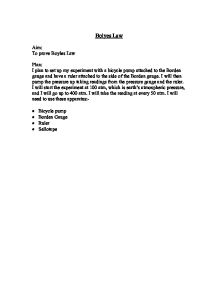 Even so, I had to draw a line of best fit as not all of the points were on the same line. When I did this I found that all of the points on the graph were close to the line of best fit except one. This point was the last one and may have been inaccurate due to the fact that at about 300 atm it became harder to pump the Bicycle pump and this may have lead to some inaccuracy. The pressure volume graph shows me that my prediction and Boyles law is true because from the graph you can tell that as the pressure increases the volume decreases. My prediction matched up very well to what happened when I did the experiment. So now I can say Boyle's law is correct. The volume of a fixed mass of gas is inversely proportional to its pressure, provided the temperature of the gas remains constant. The pressure, 1/volume graph also prove my prediction that both volume and pressure are inversely proportional. I can now say that if the pressure is doubled the volume is halved and so if there is three times the pressure is applied then you get one-third the volume and so on. When it comes to the equations I can also say there are three state variables involved. ...read more.

Instead of using a bicycle pump you could use an electric pump which would do the pump up the pressure more easily. You could also find a new Borden gauge that would allow you to pump the pressure up to a higher atm then the one we used. This would allow you to get more results and have a more accurate. There was the phrase in Boyles Law, 'Providing the temperature is constant'. Even though the chances of there being a large temperature change are very low, as I was unable to find a way of keeping the temperature around the Borden gauge constant, you could try and find a way of keeping the temperature constant. You could take this experiment further by proving Charles Law and the pressure law. This would allow me to then prove the combined gas law. All of this information is very relevant to divers. When diving, especially in shallow water (10m, where the danger is at its greatest), there could be temptation for you to hold your breath when swimming back up to the surface. If you were to do so, the ambient pressure as you rise to the surface would decrease, resulting in the volume of air in your lungs to increase. If you did not let go of your breath on the way up, there would be a serious possibility of a burst lung (air embolism). This is why divers must remember to breathe out when swimming to the surface. ...read more.