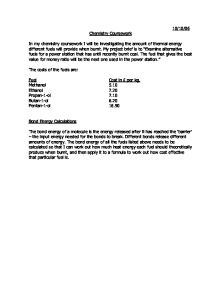 The main factor which has affected the results here has been the heat loss from the fuel flame into the surroundings. The results are also consistent to this theory. I believe that the accuracy of my experiments and of my investigation gives proof that - as in my hypothesis - Butan-1-ol should be chosen as the new fuel for the power station. Most of the method worked accurately, but to increase this, I would have used a top pan balance to measure the volume of water needed, as this would have taken away the chance of leaving drops in the bottom of the measuring tube. Electronic 'nodes' to measure accurately the temperature of water could have been utilised in making Temperature/Time graphs, to show the gradient with different fuels. This could have added a greater depth to my investigation as I could accurately measure the temperature change over a certain time, and see which fuel would raise the temperature of the water the fastest. Problems such as the incomplete combustion and flickering flames could be solved by building an insulation chamber, made from heat-reflecting materials to direct as much heat as possible onto the beaker. Pure oxygen would also be pumped in, to allow the fuel to combust as fully as possible. This may not be possible in the real power station, so incomplete combustion would play a part in the daily routine of the station, possibly increasing the running costs. ...read more.

The author has successfully carried out an experiment to choose a fuel for a power station which would be the most cost-effective. They have calculated the percentage yield of each of the fuels, and used bond enthalpy values to predict ...

The author has successfully carried out an experiment to choose a fuel for a power station which would be the most cost-effective. They have calculated the percentage yield of each of the fuels, and used bond enthalpy values to predict the best fuel, and used this information alongside their experiment to come to a well reasoned conclusion, and considered sources of uncertainties in their experiment, as well as suggesting improvements.

The author began their investigation by using bond enthalpy values to predict the cost per KJ of energy released by burning each fuel. Although they have not quite appeared to understand the definition of bond enthalpies, saying Ã¢â‚¬Å“The bond energy of a molecule is the energy released after it has reached the Ã¢â‚¬ËœbarrierÃ¢â‚¬â„¢ Ã¢â‚¬â€œ the input energy needed for the bonds to breakÃ¢â‚¬Â, when a better definition would have been the energy required to break a particular bond in a gaseous molecule. It is also unclear where these values came from, as they do not match the values for the enthalpy of combustion in my data booklet. I would have quoted the enthalpy of combustion values from the data booklet, then converted these from KJ/mol to KJ/kg, and finally calculated the cost per KJ of energy produced (or the number of KJ per pound). This just makes it much clearer to the examiner how you got the values, as well as showing some mathematical ability. After predicting which fuel would be best, the author carried out the experiment. They did similar calculations to calculate how cost effective each fuel was, and compared their results to the predicted results, calculating the percentage yield. Although they have identified some anomalies in their data, I would have shown how I calculated that these were anomalies, using: anomalies > mean + 0.5 x interquartile range or < mean Ã¢â‚¬â€œ interquartile range. This just tells the examiner exactly what you are doing so he can give you more marks for it! Occasionally, the author doesnÃ¢â‚¬â„¢t explain things very clearly, for example I would have explained the purpose of the preliminary experiment at the beginning of that section, rather than at the end, which makes the report much easier to follow. They have also occasionally said things such as Ã¢â‚¬Å“the prediction that pentan-1-ol would require the least fuel to heat the waterÃ¢â‚¬Â without explaining where this came from, which could easily confuse the reader.

The authorÃ¢â‚¬â„¢s spelling and grammar is very good throughout, and they have presented their report well with clear sections with sensible headings. They have made good use of tables and graphs to display their results, and used very good scientific vocabulary throughout. However, at times they donÃ¢â‚¬â„¢t appear to quite understand this, for example they said Ã¢â‚¬Å“To measure the exothermic energy supplied by burning each of the fuels aboveÃ¢â‚¬Â when they were measuring the thermal energy released by the combustion of each fuel. However, for the most part they have shown a very good knowledge of chemistry and how to present their work well.