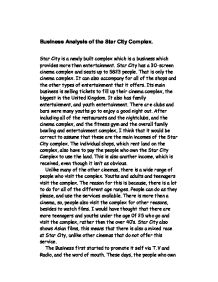 Star City advertises itself in the local newspaper. The local newspaper has a page full of the three main cinemas in the area. From the paper, we can see that Star City clearly has more films then any of its competitors, and it also has the latest in Asian movies. We can also see that there is more cinema times whom various films (Mainly the latest releases), which is more convenient for some people. They can show more showings of the film, because they have thirty screens, this is much more then any of its competitors. Each of the above has its advantages and disadvantages. The advantages of having multiple amounts of showing times for various films is that, more people who can't see a certain film at a certain time now can, because Star City shows them more frequently. This will attract more viewers to the cinema, and to the complex. I don't think that it is possible to say that there is a disadvantage to the above situation. ...read more.

They currently have the website set up, but they haven't publicised too much. I think that they should research, and find out which are the most popular and most frequently visited websites and then set up a hyperlink through the website to the Star City website. It is obvious that they would have to research in the .co.uk websites. This is another form of advertising, which the people who are in charge of advertisements should consider. They currently don't have any hyperlinks connecting another website to their own. I think that they should do this. The reason why I think that they should do this, is because, many people use the Internet now in the modern world. Those people who do use the Internet quite frequently will then know about Star City and they may then visit it if they live near or find it interesting. They haven't advertised it like this using hyperlinks before, so I am not sure whether it would work, but I would have thought that it would work. ...read more.