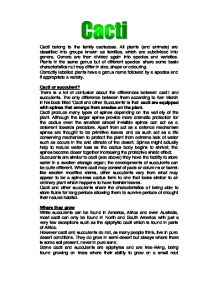 Cacti belong to the family cactaceae.

Cacti belong to the family cactaceae. All plants (and animals) are classified into groups known as families, which are subdivided into genera. Genera are then divided again into species and varieties. Plants in the same genus but of different species share some basic characteristics nut may differ in size, shape or colouring. Correctly labelled plants have a genus name followed by a species and if appropriate a variety. Cacti or succulent? There is a lot of confusion about the differences between cacti and succulents. The only difference between them according to Ken March in his book titled 'Cacti and other Succulents' is that cacti are equipped with spines that emerge from areoles on the plant. Cacti produce many types of spines depending on the variety of the plant. Although the larger spines provide more dramatic protection for the cactus even the smallest almost invisible spines can act as a deterrent towards predators. ...read more.

Cacti and other succulents share the characteristics of being able to store fluids for long periods allowing them to survive periods of drought their natural habitat. Where they grow While succulents can be found in America, Africa and even Australia, most cacti can only be found in North and South America with just a very few exceptions such as the epiphytic cacti which is found in parts of Africa. However cacti and succulents do not, as many people think, live in pure desert conditions. They do grow in semi-desert but always where there is some soil present, never in pure sand. Some cacti and succulents are epiphytes and are tree-living, being found growing on trees where their ability to grow on a small root system with a minimal reserve of water helps them to exploit their potential even in such a difficult situation. ...read more.

the famous alcoholic spirit "Tequila" is made from the fleshy tissue of a variety of Agave; another can be made into wine and the fibrous tissue of yet another is made into rope. Cacti have also been used as a hedging, which is not only stock-proof but also likely to deter rustlers. Cacti and other succulents have long occupied a special place amongst botanists and plant collectors throughout the world. Some people collect only one group of plants such as Mammilaries many of which are very free flowering. Small collections can be grown together in bowls or individually in pots. A greenhouse is recommended for large collections although windowsills and conservatories are still suitable for the small collectors. Botanical gardens in England and around the world provide large cacti collections, which can be admired by those who are interested. In these situations they are generally planted out rather than pot grown. ...read more.