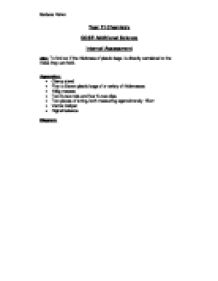 Chemistry Coursework. Aim: To find out if the thickness of plastic bags is directly correlated to the mass they can hold.

Year 11 Chemistry GCSE Additional Science Internal Assessment Aim: To find out if the thickness of plastic bags is directly correlated to the mass they can hold. Apparatus: * Clamp stand * Five to Seven plastic bags of a variety of thicknesses * 100g masses * Two K-nex rods and four K-nex clips * Two pieces of string, both measuring approximately 15cm * Vernia Caliper * Digital balance Diagram: Method: 1. Select a range of five to seven plastic bags, preferably each of a different make and thickness. 2. Measure three, 3cm x 20cm strips on each bag and cut them out. 3. Measure the thickness of one of the strips from each bag using a Vernier Caliper. Then measure the mass using a digital balance 4. Set up the apparatus of a clamp stand and two K-NEX rods, four K-NEX clips and two loops of string. 5. Wrap approximately 1cm of the plastic bag strip around the centre of one K-NEX rod, and secure in place with two clips. Then secure the other end of the strip around the remaining K-NEX rod. 6. Hang one of the loops of string (which are tied around one K-NEX rod) on to the clamp stand and secure, and attach the other loop of string to the lower K-new rod. ...read more.

The second graph shows ascending thickness, with Morrisons being the thinnest at 0.01mm, and Virgin being the thickest at 0.08mm. This again proves that thicker bags don't necessarily hold more mass. An example of this is the Argos bag; it is 0.02mm thick, but can hold 300g more mass than the Ryman bag, which is 0.04mm thick. The reason the Morrisons bag can hold more mass than the Aldi bag is because the polymers are cross-linked, and so the polymer molecules cannot slide over each other as easily, making the bag harder to break. Equally, the Aldi bag (0.01mm thick) can hold more mass than the Disney bag (0.03mm thick.) This is because the Aldi bag will have more cross-links and a longer polymer chain than the Disney bag. The load per gram column of the results table shows that the lighter the bag is doesn't always mean that it can hold less mass per gram. For example, The Tesco bag (0.09g) holds more load per gram of bag proportionally than the Aldi bag, which has a mass of 0.2g. One of the reasons this is, is because of cross-linking, which means there are more covalent bonds between the polymers, which make the bag stronger. Making Plastic Bags: When fractional distillation occurs to separate crude oil, one of the fractions given off is Naptha (a hydrocarbon,) ...read more.

Paper sacks generate 70% more air and 50 times more water pollutants than plastic bags. Plastic bags are also convenient, lightweight and easy to carry, and manufacturing them produces little waste. They can be used for varied purposes, such as to wrap food, store extra things while travelling, and to hold wet or dirty clothes. They are also useful as rubbish bags during journeys. Strength, durability, versatility, and variety are some of the key advantages of plastic bags. They are also used to advertise shops, and so are cost affective. Jute bags are an alternative to polythene bags, along with bags for life. This is a type of sustainable development, because they cause much less harm to the environment because they are reused, but also fulfil the needs of the current population. In my opinion, plastic bags serve their purpose well, and are very useful. However, because we now know the damage they cause to the environment, such as plastic dust and high level of toxins, I think it is necessary to find alternatives, such as jute bags and bags for life. I also think that people should reuse their plastic bags as much as possible, instead of getting new ones every time they go to the shops. If we do not cut down on the use and disposal of plastic bags, plant life will die off, and so this will have great effects on human life too. ?? ?? ?? ?? Barbara Palvin ...read more.