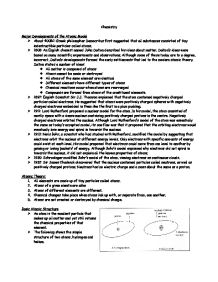 Chemistry Major Developments of the Atomic Model > About 400BC: Greek philosopher Democritus first suggested that all substances consisted of tiny indestructible particles called atoms. > 1808: An English chemist named John Dalton described his ideas about matter. Dalton's ideas were based on many scientific experiments and observations. Although some of these today are to a degree, incorrect, Dalton's developments formed the early settlements that led to the modern atomic theory. Dalton stated a number of ideas: * All matter is composed of atoms * Atoms cannot be made or destroyed * All atoms of the same element are identical * Different elements have different types of atoms * Chemical reactions occur when atoms are rearranged * Compounds are formed from atoms of the constituent elements. > 1897: English Scientist Sir J.J. Thomson explained that the atom contained negatively charged particles called electrons. He suggested that atoms were positively charged spheres with negatively charged electrons embedded in them like the fruit in a plum pudding. > 1911: Lord Rutherford proposed a nuclear model for the atom. In his model, the atom consisted of mostly space with a dense nucleus containing positively charged protons in the centre. Negatively charged electrons orbited the nucleus. ...read more.

> Nuclear fusion is the fusing together of tiny nuclei, such as deuterium (a special form of hydrogen). This reaction is the most powerful source of energy known and involves a minimum of dangerous waste. Fusion is used in hydrogen bombs but has not been successfully developed for power stations as for the enormous heat required to start the nuclear process. Advantages of Nuclear Power > It produces little atmospheric emission. It does not produce carbon dioxide so it does not contribute to the greenhouse effect, acid rain or local pollution from particles. > Nuclear power can also be economically beneficial. Disadvantages of Nuclear Power > The transport and disposal of radioactive material is damaging to the environment if not carefully coordinated. > Nuclear power plants have a limited life due to the dangerous radioactivity where as nuclear power plants reach this date, nuclear power plants would have to be dismantled. This is a relatively expensive process and nobody knows where to store the most radioactive parts. > The cost of constructing and maintaining nuclear power plants is high. > Nuclear power plants are also potentially dangerous as problems are potential and the results will be disastrous. > Nuclear energy resources provide a security threat. ...read more.

This is a very comprehensive set of notes that goes into detail about how nuclear reactors work and the problems associated with them. It is written in a concise, but clear manner