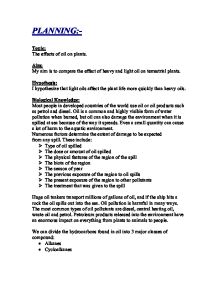 Compare the effect of heavy and light oil on terrestrial plants.

PLANNING:- Topic: The effects of oil on plants. Aim: My aim is to compare the effect of heavy and light oil on terrestrial plants. Hypothesis: I hypothesize that light oils affect the plant life more quickly than heavy oils. Biological Knowledge: Most people in developed countries of the world use oil or oil products such as petrol and diesel. Oil is a common and highly visible form of water pollution when burned, but oil can also damage the environment when it is spilled at sea because of the way it spreads. Even a small quantity can cause a lot of harm to the aquatic environment. Numerous factors determine the extent of damage to be expected from any spill. These include: > Type of oil spilled > The dose or amount of oil spilled > The physical features of the region of the spill > The biota of the region > The season of year > The previous exposure of the region to oil spills > The present exposure of the region to other pollutants > The treatment that was given to the spill Huge oil tankers transport millions of gallons of oil, and if the ship hits a rock the oil spills out into the sea. Oil pollution is harmful in many ways. The most common types of oil pollutants are diesel, central heating oil, waste oil and petrol. Petroleum products released into the environment have an enormous impact on everything from plants to animals to people. We can divide the hydrocarbons found in oil into 3 major classes of compound: * Alkanes * Cycloalkanes * Arenas There are two different types of oils classified into "Light oils" and "Heavy oils". LIGHT OILS: - Light oils include crude oils. Crude oil or petroleum is thick, dark, and are smelly liquids; they are volatile (easily evaporated) so they usually don't remain for long in the environment typically no longer than a few days, and when their components have evaporated, a sticky tar called pitch is formed. ...read more.

I sprayed the oil on the plants very carefully making sure that no oil was spilt. I oiled them everyday and after every 2 days I recorded their measurements in a table. After 10 days I got down all the reading that I needed and plotted a graph and checked the differences in the readings before and after oiling the plants. Observations:- 4 weeks after growing the plants: - The plants in all the 3 pots grew normally and looked healthy. Leaves were dark green in colour. Some of the plants had large leaves with thick stems while some other plants had small leaves with thin stems. As the plants had grown very tall by now, I had to support them with twigs so that they don't bend and fall. > Plants in T1 (light oils): They all grew at a fast rate till Day 4 and the maximum height reached was 23.5cm and then by Day 5 there was a sudden fall and by Day 6 all the plants were dead. > Plants in T2 (heavy oils): They all grew at a very slow rate till Day 6 and the maximum height was 26cm. By Day 8 all the plants were dead. All the plants leaves had changed their colour to yellow and they were all dry and wilted. > Plants in T3 (control): They all grew normally with green leaves and there height kept on increasing till the last day of the experiment and the maximum height reached by the plants was 24 cm. The final table showed readings, which includes: - > Day 0: 4 weeks after growing the plants and when they were ready for the experiment (Before oiling them). > Day 2: 2 days after I started oiling them. > Day 4: 4 days after oiling them and so on till Day 10. X indicates that the plants were dead. ...read more.

> Stained or dead grass around the fill pipe. > Dead or dying bushes or trees around the tank. > Ongoing observation of oil flow from and into a vessel; > Regular inspection of hoses and connections; > Monitoring of weather conditions > Installation of dikes around storage tanks to prevent oil from escaping if an accident takes place. STEPS TO CLEAN UP OIL SPILLS: - > Leave it alone and let it degrade naturally.25% of crude oil in a spill is volatile and evaporation into the atmosphere within 3 months, 60% of crude oil is non-volatile, less dense then water, and floats on the surface where it is broken down by bacteria; the remaining 15% forms globules that sink to the bottom and are broken down slowly. > Mechanical recovery: this usually involves specialized recovery vessels > Burning-this can be 95-98% efficient, but causes black smoke and soot which may pollute coastal towns and cities. > Aerial dispersants-dispersants are chemicals that reproduce the natural action of waves, they break oil into droplets, stabilize the stay. Dispersants prevent slicks from reforming on the surface. They do not actually make oil disappear, but move the oil from the surface down into the water, where it becomes available to naturally occurring marine bacteria, which can then degrade it. This degradation can reduce the oil to 5% of its original volume. Once the oil has reached the shore it may be: - > Physically removed by taking off the top layer of sand > Dispersed using detergents or high-pressure hoses. > Removed manually by a large workforce using a variety of techniques. Perhaps the best method of dealing with oil spills is by bioremediation. This aims to speed up oil degradation by stimulating naturally occurring bacteria to break down the oil faster. These bacteria use oil as a food source, but they also need oxygen, nitrogen, and phosphorus. Oxygen is usually plentiful, but raising levels of nitrogen and phosphorus by applying fertilizer increases the rate at which the bacteria can feed on oil. ...read more.