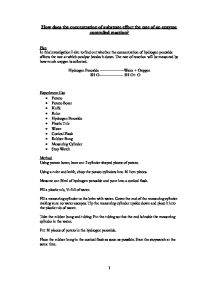 Compare the Presentation of Rebellion in 'Ninety Eighty Four' and 'Brave New World'.

How does the concentration of substrate effect the rate of an enzyme controlled reaction? Plan In this investigation I aim to find out whether the concentration of hydrogen peroxide affects the rate at which catalyse breaks it down. The rate of reaction will be measured by how much oxygen is collected. Hydrogen Peroxide -------------------Water + Oxygen 2H O------------------- 2H O+ O Experiment List * Potato * Potato Borer * Knife * Ruler * Hydrogen Peroxide * Plastic Tub * Water * Conical Flask * Rubber Bung * Measuring Cylinder * Stop Watch Method Using potato borer, bore out 2 cylinder shaped pieces of potato. Using a ruler and knife, chop the potato cylinders into 10 1cm pieces. Measure out 50ml of hydrogen peroxide and pour into a conical flask. ...read more.

We can clearly see that the line on the graph is steeper when the concentration of the hydrogen peroxide in the solution is higher. If the line of the graph is steep, it means that the reaction happened quickly. Whereas if the line was gentle, the reaction would have happened slowly. It is clear from the graph that the higher the concentration of H O , the quicker the reaction takes place. Graph B shows again whether the concentration of H O affects the speed of a reaction. The points plotted on graph B are the final result of each experiment i.e- how much oxygen was collected after 10 minutes. The horizontal scale is the different concentrations of H O and water in the solution. Evaluation There was a lot of measuring involved in the experiment, which could have led to a lot of mistakes. Although my results weren't completely accurate, they still support my original prediction. 1 ...read more.