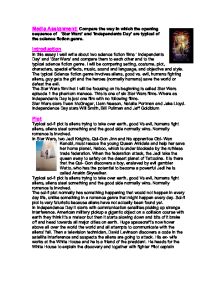 Compare the way in which the opening sequence of 'Star Wars' and 'Independents Day' are typical of the science fiction genre.

Media Assignment:Compare the way in which the opening sequence of   ‘Star Wars’ and ‘Independents Day’ are typical of the science fiction genre.

In this essay I well write about two science fiction films ‘ Independents Day’ and ‘Star Wars’ and compare them to each other and to the typical science fiction genre. I will be comparing setting, costume, plot, characters, special effects, music, sound and language, and objective and style.

The typical Science fiction genre involves aliens, good vs. evil, humans fighting aliens, guy gets the girl and the heroes (normally humans) save the world or defeat the evil.

The Star Wars film that I will be focusing on its beginning is called Star Wars episode 1 the phantom menace. This is one of six Star Wars films. Where as Independents Day is just one film with no following films.

Typical sci-fi plot is aliens trying to take over earth, good Vs evil, humans fight aliens, aliens steal something and the good side normally wins. Normally romance is involved.

July now earth’s Independence Day. The aliens destroy each state one by one.

Independence Day is set on Earth in America with a city setting. At the beginning the camera goes from the moon, follows a space ship then moves onto the earth. The Camera then does a long shot on satellite dishes, and then it goes to the Pentagon space command centre, where there’s a close up of computers and technology.

The setting is now lots of technical equipment with a man playing golf because he is bored. The technical equipment is typical in sci-fi films. Star wars has the typical sci-fi setting of space. The opening sequence is set on a space ship in the passages with sliding doors and miniature spacecrafts. Most of the walls are white and there are bright lights.

Sci-fi films have a lot of special effects like explosions, gunfire and making spaceships look as if they are flying.

Star Wars uses special effects when the Jedi are fighting the robots. The robots have guns and the Jedi have light sabers that aren’t real so special effects are used to make it look as if they are.

Independence Day has space ships looking as if they are flying and explosions; special effects are used to create these.

I conclude that both Independence Day and Star Wars both have typical sci-fi genre features even if they are not the same.

Both of the beginnings consist of futuristic characters, objects, setting and plot. Both beginnings of the films have important information for you to get whats happening in the rest of the film.