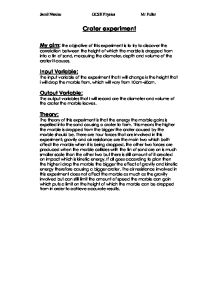 My aim: the objective of this experiment is to try to discover the correlation between the height of which the marble is dropped from into a tin of sand, measuring the diameter, depth and volume of the crater it causes.

The input variable of the experiment that I will change is the height that i will drop the marble from, which will vary from 10cm-60cm.

The output variables that I will record are the diameter and volume of the crater the marble leaves.

The theory of this experiment is that the energy the marble gains is expelled into the sand causing a crater to form. This means the higher the marble is dropped from the bigger the crater caused by the marble should be. There are Four forces that are involved in this experiment; gravity and air resistance are the main two which both affect the marble when it is being dropped, the other two forces are produced when the marble collides with the tin of sand are on is much smaller scale than the other two but there is still amount of it created on impact which is kinetic energy. If all goes according to plan then the higher i drop the marble the bigger the effect of gravity and kinetic energy therefore causing a bigger crater.

Line up the bottom of the meter stick with the tin of sand so the bottom of the meter stick reading 0cm is inline with the surface of the sand.Draw up a table to plot the results in including 3 diameter columns for each of the chosen heights and also a range and mean average column.Check that the level of the sand is level and at the right height have chosen.Drop (don’t throw) the marble from the desired height. when dropping marble make sure you look at the marble at a level angle and also when dropping the marble for example if you are dropping it from a height of 30 cm place the base of the marble at 30cm not the top of the marble or lining the marbles midway point at 30cm.Slowly and carefully remove the marble from the sand in order not to push the marble in more which will affect the results Take your compass and place each point onto two edges directly opposite each other which intersect the midpoint of the crater.Place the compass against the ruler to measure the width of the crater and record the results to 1d.p. when measuring look at the ruler directly on the side to get a more accurate reading.Repeat three times for each height.
...read more.

What I have done to minimise errors:

I have been extremely careful to minimise the amount of mistakes that I make in this experiment by simply holding the pole in a straight line as it often leans to the side therefore changing the height of which the marble is dropped from.

In conclusion to this experiment I believe that I have proved the theory of gravity correct and that there is a definite correlation with the size of the crater and the height of which it is dropped from.  Although I have encountered a few problems in this experiment I still believe that my data is reliable, but in order to achieve more reliable results  I could carry out the experiment again but also improving it using what I mentioned.