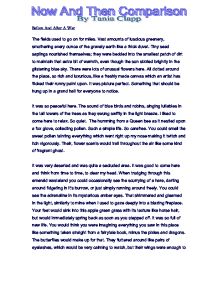 Before And After A War The fields used to go on for miles. Vast amounts of luscious greenery, smothering every ounce of the gravely earth like a thick duvet. Tiny seed saplings nourished themselves; they were bedded into the smallest patch of dirt to maintain that extra bit of warmth, even though the sun sizzled brightly in the glistening blue sky. There were lots of unusual flowers here. All dotted around the place, so rich and luxurious, like a freshly made canvas which an artist has flicked their runny paint upon. It was picture perfect. Something that should be hung up in a grand hall for everyone to notice. It was so peaceful here. The sound of blue birds and robins, singing lullabies in the tall towers of the trees as they swung swiftly in the light breeze. I liked to come here to relax. So quiet. The humming from a Queen bee as it nestled upon a fox glove, collecting pollen. Such a simple life. So carefree. You could smell the sweet pollen tainting everything which went right up my nose making it twitch and itch vigorously. ...read more.

In the distance past the sloping hill tops you could see the smallest winding road, which cars drove steadily along. It looked like millions of tiny ants crawling along a thin prickly twig. If you looked at it now you wouldn't think it was the same place. Now this is after the devastating, retched war broke out. I can't believe what I'm seeing. Is this a nightmare? I close my eyes and open them again. I think my eyes are deceiving me. I close them again and open them a second time, rubbing my eyes constantly until they are sore and bloodshot red. Making them coarse and rugged, blurring my perception in the process, but I would have preferred to have seen this than that what it truly was. I pinch myself over and over again but I knew it was reality. Everything has gone. Dead. There is no more luscious greenery which would have been made to suit heaven. Just soot from burnt sods. The parched hungry earth has drunk up all the rain making it dry and dehydrated. ...read more.

This is the only living thing I can see. They can smell death. They can sense it. The vultures are hideous all ruffled, screeching at the top of their lungs this isn't the sweet tune of the robins and blue birds I used to hear this is a painful scream which rings through my ears like a foghorn or a siren making them throb and pulsate with anger. These vultures are scrounging, famished looking for flesh to peck out with their gigantic, broken beaks. I feel as though I'm already dead. Trenching through some kind of underworld where nothing is peaceful. The taste of cold blooded raw meat on my tangible taste buds. So repulsive like the scent of dead, wet, rats poisoned in a sewer, all slushy like a sludgy swamp. The ash cut away at my eyes like a knife would do to a raw vegetable, as the aggressive wind barged its way through making my eyes water like they do with onions. This earth has swallowed up my only fantasy. This harsh war is scarring my memories. I would rather be dead, than to see this day ever again I wish it would swallow me up too. By Tania Clapp ...read more.