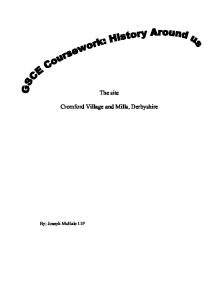 The site Cromford Village and Mills, Derbyshire By: Joseph McHale 11P Introduction During the period between 1771 and 1800 Cromford Mills were built and Cromford Village was considerably enlarged. It was built by Sir Richard Arkwright, who had invented the waterframe in 1769. The invention of the waterframe and the development of other mechanised machines turned the cotton industry from a domestic "cottage" industry into a factory driven one. The mill proved to be a great success and subsequently historians have studied a number of issues concerning both the mill and village at Cromford, which played an important part in British economic history. Unfortunately these studies have not proved to be fully conclusive as a large part of the mill was burnt down in 1890 and this has meant that certain issues have been left open to debate. This study intends to consider the same issues historians study and by using primary and secondary sources, will try to draw a balanced conclusion about the structure of both the Cromford Mill and Cromford Village during the period between 1771 and 1800. In particular this investigation will try to establish why Arkwright chose Cromford as a site for his mill? Why Cromford There were three reasons that we can consider important to the answer this question. These were: 1. The water supply; 2. the remoteness of Cromford; and 3. the readiness and willingness of the workforce that Cromford offered together with the skills developed in particular in the local lead industry. In addition to these specific factors there was an element of luck, which, combined to make Cromford an important milestone in the country's economic development. Sources Source 1 states that Arkwright chose Cromford because of the three main reasons we have mentioned. The water supply at Cromford is good and is plentiful all year round. The Cromford Sough was situated underground so it could not freeze during the winter. ...read more.

The likely changes that Arkwright made to the watercourses are shown Source 10 below. The Greyhound Pond shown in the top left-hand corner of Source 10 is one of five ponds that Arkwright made. It was made by putting a d*m on the Bonsall Brook. Before Arkwright adjusted the watercourses, only the Bonsall Brook went directly to the mill site. Arkwright linked the Greyhound Pond to the Cromford Sough, from the Cromford Sough d*m he made a new watercourse went over a aqueduct and powered the first waterwheel at the mill. On the other side of The Greyhound Pond he built a sluice, which controlled the amount of water allowed through. The new watercourse was underground and powered a second waterwheel on the first mill. The underground water sources allowed the water to be used throughout the year, as it would not freeze. Source 10 shows the watercourses and is an accurate and reliable source; we have no evidence to doubt it. Source 11 shows The Greyhound Pond and the linking channel to the Cromford Sough. The linking channel is on the left side of the photograph, under the cars shown. When the first mill was built in 1771 there was only one waterwheel. The position of this waterwheel is subject to debate. I believe that the first waterwheel was originally situated in the area that the extension was built in. In Source 12 below you can see the difference in brickwork between the two sections. This proves that the extension was built. The Bonsall Brook flows underneath the extension. When Arkwright first started developing his mill at Cromford, the Bonsall Brook was the only watercourse that ran through the mill. It is likely that Arkwright used the Bonsall Brook to power his first waterwheel. But at the same time he was adjusting and creating other watercourses so he could have two waterwheels working at the first mill. ...read more.

The water supply, which the mill had relied upon throughout its success, was reduced as a result of a lead mine drainage. Other factories across Britain were using steam power, which was more efficient than waterpower. Also the remoteness of Cromford was proving a larger problem as more mills better equipped than Cromford had been set up across Britain. But even though it demised after 70 years it is still considered a massive success and was a pioneer for industrial practice. The impact that the Cromford mill had on industry in the eighteenth century is a similar one of the impacts the computer had on industry in the twentieth century. The technology that the mill used changed the face of industry. On the social side the housing that Arkwright built for his workers changed housing around Britain and provided a template to other entrepreneurs who wished to build good quality homes for their workers. The housing built for workers, who in the past lived in poor accommodation was excellent and North Street remains standing today as a testament to the original builders. Across Britain one will find many streets with a similar design to North Street. The mill at Cromford was part of the first stage of the Industrial Revolution. Technology was rapidly changing and it was always likely that the mill would be outdated after a period of time, just like computers today. The Cromford mill could not compare to a mill that was built 50 years afterwards the same as a computer built 10 years ago could not compare with a computer today. The Industrial Revolution moved at a fast pace and left Cromford behind. But Cromford is remembered as the pioneer in the Industrial Revolution as it was the worlds first successful cotton mill and it had superb housing for the workers. Arkwright when he was alive wanted to gain social acceptance and wanted to be remembered, the mill and village have assured that he will always be remembered as an integral part of British history. ...read more.