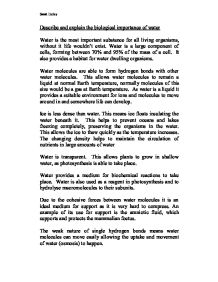 Describe and explain the biological importance of water

Describe and explain the biological importance of water Water is the most important substance for all living organisms, without it life wouldn't exist. Water is a large component of cells, forming between 70% and 95% of the mass of a cell. It also provides a habitat for water dwelling organisms. Water molecules are able to form hydrogen bonds with other water molecules. This allows water molecules to remain a liquid at normal Earth temperature, normally molecules of this size would be a gas at Earth temperature. As water is a liquid it provides a suitable environment for ions and molecules to move around in and somewhere life can develop. Ice is less dense than water. This means ice floats insulating the water beneath it. This helps to prevent oceans and lakes freezing completely, preserving the organisms in the water. This allows the ice to thaw quickly as the temperature increases. ...read more.

Polar molecules include sugars and glycerol, which have free hydroxyl groups (OH) projecting from the molecule. Polar molecules carry an unevenly spread charge. This makes some parts of the molecule positive and some parts negative. Water is also a molecule. When sugar is mixed with water the small positive charge on the hydrogen of the water molecule is attracted to the small negative charge on the of the sugar. In a similar way the oxygen in water is negatively charged and is attracted to the charged part of the sugar molecule. These forces of attraction make the water molecules stick to the sugar with hydrogen bonds. This separates the sugar molecules. The sugar therefore dissolves. Waters' ability to act as a solvent allows the dissolving chemical to move about more freely and react together. We say that the sugar molecules are hydrophilic. Non polar molecules like lipids are insoluble in water. If lipids are mixed with water the water molecules stick to each other. This pushes the non polar (lipid) ...read more.

Most processes in living organisms take place in solution in this way e.g. removal of urea and ammonia in urine. Non polar molecules are hydrophobic and are pushed together by water molecules Water molecules are attracted to each other. It increases the stability of structures such as protein and membrane structures High energy is needed to increase its temperature Hydrogen bonding restricts the movement of water molecules. It provides a more stable habitat for organisms and internal body temperature changes are minimised It is more dense as a liquid than as a solid Water expands as it freezes, therefore making ice less dense than liquid water. Reduces likelihood of large amounts of water such as oceans and lakes freezing completely, increasing the chance of life in cold conditions. Water molecules stick to each other Hydrogen bonds cause water molecules to stick together. Creates a high surface tension at the surface of water allowing small organisms such as pond skaters to use the surface as a habitat and to skate over the water. Sarah Linley ...read more.