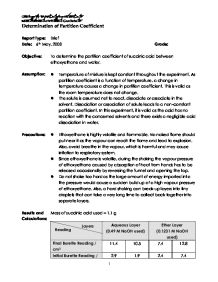 Determination of Partition Coefficient Report Type: Brief Date: 6th May, 2008 Grade: Objective: To determine the partition coefficient of succinic acid between ethoxyethane and water. Assumption: * Temperature of mixture is kept constant throughout the experiment. As partition coefficient is a function of temperature, a change in temperature causes a change in partition coefficient. This is valid as the room temperature does not change. * The solute is assumed not to react, dissociate or associate in the solvent. Dissociation or association of solute leads to a non-constant partition coefficient. In this experiment, it is valid as the acid has no reaction with the concerned solvents and there exists a negligible acid dissociation in water. Precautions: * Ethoxyethane is highly volatile and flammable. No naked flame should put near it as the vapour can reach the flame and lead to explosion. Also, avoid breathe in the vapour, which is harmful and may cause irritation to respiratory system. * Since ethoxyethane is volatile, during the shaking the vapour pressure of ethoxyethane caused by absorption of heat from hands has to be released occasionally by reversing the funnel and opening the tap. * Do not shake too hard as the large amount of energy imparted into the pressure would cause a sudden build up of a high vapour pressure of ethoxyethane. Also, a hard shaking can break up layers into tiny droplets that can take a very long time to collect back together into separate layers. ...read more.

Conclusion: The partition coefficient of succinic acid between water and ethoxyethane is found to be 0.13. Discussion: Importance of Immiscible Solvents Used in the Experiment Substances are said to be immiscible if in all proportions, they do not form a solution. One of the examples is ethoxyethane and water. Ethoxyethane is fairly soluble in water, but these two solvents are immiscible as they are not soluble in any proportions. This is important as it is one of the criteria to keep the partition coefficient constant. Interpretation of Graph 1 In Graph 1, it is clear that the graph is linear, which means ratio of the equilibrium concentrations of the acid in water and ether under the experimental conditions is a constant, i.e. the partition coefficient is a constant. In addition, the straight line has a constant slope implies that the coefficient is independent of the amount or concentration of the acid in both layers, as well as the amount of solvent used. Besides, the solvents used should not contain any solute that is going to be dissolved in them. Therefore, the graph should pass through the origin as there can be no distribution if there is no succinic acid present. Factors Affecting Partition Coefficient There are some factors which affect the value of partition coefficient. Two examples of them are the respective solubilities of succinic acid in the separate solvent and the variation of temperature. ...read more.

Therefore the amounts of solvents need not be measured out accurately. Reason of Adding Water to Ethereal Solution before Titration NaOH is an aqueous solution but succinic acid to be titrated is dissolved in the organic solvent, ethoxyethane. It needs time to allow the acid to diffuse out in order to react with NaOH added. Therefore a small amount of water is added to extract the acid from the ether and thus facilitates its reaction with NaOH. Identification of Solvent in Respective Layers The layer with higher density sinks to the bottom. Since the density of ethoxyethane is 0.7134 g cm-3, which is lower than that of water with density 1 g cm-3, ethoxyethane floats on the water and thus two layers of solvents can be identified. During the experiment, this can also be tested with a drop of water. Allow the mixture stand. Since there is a layer consist of water, when a drop of water is put into the mixture, if the droplet sinks to the bottom of the mixture (a bubble will be seen), it indicates the bottom layer is water and the remaining one is ether. If there is no bubble, then the top layer should be water and vice versa. Reference: (1) Standard Value of Partition Coefficient of Succinic Acid between Water and Ethoxyethane Chemistry in Context, Graham Hill and John Holman, page 296 - End of Report - ?? ?? ?? ?? Chemistry TAS Experimental Report Determination of Partition Coefficient 1 ...read more.