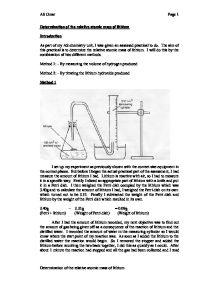 Determination of the relative atomic mass of lithium.

Determination of the relative atomic mass of lithium Introduction As part of my AS chemistry unit, I was given an assessed practical to do. The aim of this practical is to determine the relative atomic mass of lithium. I will do this by the combination of two different methods. Method 1: - By measuring the volume of hydrogen produced Method 2: - By titrating the lithium hydroxide produced Method 1 I set up my experiment as previously shown with the correct size equipment in the correct places. But before I began the actual practical part of the assessment, I had measure the amount of lithium I had. Lithium is reactive with air, so I had to measure it in a specific way. Firstly I sliced an appropriate part of lithium with a knife and put it in a Petri dish. I then weighed the Petri dish occupied by the lithium which was 3.40g and to calculate the amount of lithium I had, I weighed the Petri dish on its own which turned out to be 3.31. Finally I subtracted the weight of the Petri dish and lithium by the weight of the Petri dish which resulted in its own. ...read more.

But in method two, I was titrating so I had to look at the liquid and construe how much acid was needed. This is not very accurate because you have to estimate and different people have different eye sights which affects it. Another factor is the temperature. If we kept the temperature of the room constant at about 20-25 o C, the results would be more accurate. To prevent the errors we could minimise reactions between lithium and air, by putting lithium in an organic solvent such as cyclohexane which won't react with the lithium. Another factor is that in the beginning part of the investigation we could put the bung on quicker to prevent any hydrogen gas escaping. Better measuring cylinders, measuring balances and more accurate pipettes would help too. Also in method two instead of deducing the end point of the reaction by human eyesight, we could accurately measure the end point by some sort of colour receptor. Anther detrimental factor is the batch of lithium used. If the lithium has aged then some or most of its reactivity may be lost. Ali Omar Page 1 Determination of the relative atomic mass of lithium ...read more.