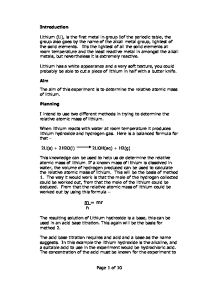 4. Now the indicator needs to be placed into the Lithium hydroxide, in this case it is Phenolphthalien. The indicator will tell us when the solution is neutralised. The initial colour of the base with the Phenolphthalien should be a pinkish colour. 5. Now open the tap on the burette so that the acid flows into the base. While the tap is running try to simultaneously shake the beaker. 6. Let the acid flow, but keep an eye on the base in the beaker, once the colour of the contents of the beaker changes from pink colour to colourless, immediately close the tap. 7. Record the amount of hydrochloric acid that was required to neutralise the Lithium hydroxide. Clean all apparatus with distilled water and perform the test another three times. This will insure a more accurate result, as the average of the four tests will be used. Fair Test The key to this experiment being a fair test is measurement. If I can ensure that all my measurements are accurate then the results will be fair and accurate, the experiment could give false results. I must conduct all the experiments under the same conditions. Whether that means using the same apparatuses in each experiment of the keeping the temperature constant. Risk Assessment There are always risks involved when handling any kind of chemicals. Both the lithium hydroxide and the hydrochloric acid are irritants. To ensure that there is maximum safety, all personnel involved in the experiment should wear proper eye protection, like goggles and as well as gloves. ...read more.

Another example of human error that may affect results, is deciding when the end point of titration is and the reaction time between realising when the end point and stopping the flow of acid from the burette. If the reaction time is slow, there could be more acid used than that that is needed. This error can be eradicated by slowing down the pace at which the titration is performed. Method 1 was very inaccurate. I think one of the mistakes that were made during the experiment was to assume that the temperature was standard. Measurements of the room temperature wee not taken during the experiment so we cannot be sure if the room temperature was standard. If the room temperature is not standard, one mole of the hydrogen would not take up 24000cm�, this would mean that all the calculations would be incorrect. From observing the percentage accuracy's, I can see that Method 2 is more accurate and effective than Method 1 . There are a number of factors that could be responsible for method 1 being less accurate. These could be errors, there could be errors in measurement of the lithium or distilled water, oxidation of the lithium occurring when lithium is out in open air. Also, I repeated Method 2 four times, which would give me better results as I could use an average of the different tests. This was not possible in Method 1 as I had to preserve the lithium hydroxide solution for method 2, which meant that method 1 could only be performed once. All in all I think I have carried out the experiments to the best of my abilities. ?? ?? ?? ?? Page 1 of 10 ...read more.