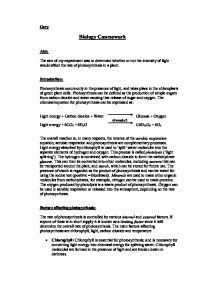 Gary Biology Coursework Aim: The aim of my experiment was to determine whether or not the intensity of light would affect the rate of photosynthesis in a plant. Introduction: Photosynthesis occurs only in the presence of light, and takes place in the chloroplasts of green plant cells. Photosynthesis can be defined as the production of simple sugars from carbon dioxide and water causing that release of sugar and oxygen. The chemical equation for photosynthesis can be expressed as: Light energy + Carbon dioxide + Water Glucose + Oxygen chlorophyll Light energy + 6CO2 + 6H2O C6H12O6 + 6O2 The overall reaction is, in many respects, the reverse of the aerobic respiration equation; aerobic respiration and photosynthesis are complementary processes. Light energy absorbed by chlorophyll is used to 'split' water molecules into the separate elements of hydrogen and oxygen. This process is called photolysis ('light splitting'). The hydrogen is combined with carbon dioxide to form the carbohydrate glucose. This can then be converted into other molecules, including sucrose that can be transported around the plant, and starch, which can be stored for future use. The presence of starch is regarded as the product of photosynthesis and can be tested for using the iodine test (positive = blue/black). Minerals are used to make other organic molecules from carbohydrates; for example, nitrogen can be used to make proteins. ...read more.

Last but very important we made sure that once the Canadian pond weed was introduced to the light it was always kept in the light until the end of our experiment. Prediction: I predict that as the intensity of light increases, so will the rate of photosynthesis. I will also expect the graph to be a curve graph; this is because I believe that as the light intensity increases, the rate of photosynthesis will only increase at a proportional rate until a certain level is reached at this point the rate of increase will go down, this is because an increase in light intensity will have no further effect on the rate of photosynthesis. I also believe if the results are correct they will follow the inverse square law. I = 1 Intensity = 1 D2 Distance2 Area full intensity 5cm Light 4 x Area 0.25 intensity 10cm Preliminary work: Before performing the experiment we had to make a few decisions; how long to time each trial, how much water to use, how much NaHCO3 to use, how many trials to do and what measurements to do. Myself and my partner decided to time the experiment for 3minutes so we could obtain sufficient results and it was also a recommended time by our teacher, we used 30cc of water because we wanted to use a sufficient amount of water so we could see the pond weed photosynthesise, we also made the decision to use 5cc of NaHCO3 to speed up the rate of photosynthesis. ...read more.

We could have prevented this error by performing the experiment in separate rooms in the pitch black apart from the lamp used to as the light source for the experiment. If I were to do this experiment again then I would start by remedying the errors that may of occurred in this experiment as I have explained above then I would make an other obvious change to create more reliable results and that is to do more trials for each distance to get an even better average. I am confident now that I can draw a firm conclusion and that conclusion is, light intensity does have a large effect on the rate of photosynthesis and the greater the light intensity the greater the rate of photosynthesis. If I were to do any follow up experiments after this I would investigate the effects of temperature and coloured lights on the rate of photosynthesis (experiment shown below. Light Test tube with 30cc of tap water Filter Ray box Meter at room temperature and 5cc of sodium hydrogen carbonate. The ray box provides a constant amount of light, the filter only lets the light required through and the light meter measures the light intensity, as different light will have a different level of intensity so the light meter will tell us how far away the ray box should be to achieve the right light intensity. ...read more.