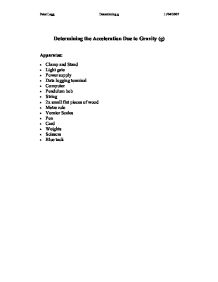 Determining the Acceleration Due to Gravity

Determining the Acceleration Due to Gravity (g) Apparatus: * Clamp and Stand * Light gate * Power supply * Data logging terminal * Computer * Pendulum bob * String * 2x small flat pieces of wood * Metre rule * Vernier Scales * Pen * Card * Weights * Scissors * Blue tack Theory: Gravity is a force of attraction between all objects. This attraction is proportional to the mass of the objects and inversely proportion to the distance between their centres. For a notable force the mass must be large. The earth has a great enough mass to show a measurable force of gravity. This is the force that attracts everything towards the centre of the earth. The force of attraction is greater for each mass, using this equation: F=mg Where g is the force of gravity. Force is related to acceleration and mass using this equation: F=ma Simultaneously equating these equations gives us: mg=ma g=a Therefore g in newtons is the same value as the acceleration due to gravity in metres per second. The simplest way to measure g is to drop a mass and measure it's acceleration. We can find acceleration, by finding the change in velocity over a certain period: a=(v-u)/t Where velocity is measured over a distance of 5cm, this will be the average velocity. I will consider this velocity to occur in the middle of the 5cm distance. As the object is accelerating, this is unlikely to be the place of average velocity, it is more likely to be after this but it is extremely difficult to determine the exact location. I think this method would be less accurate as it is hard to measure acceleration accurately using just one light gate. This is because the average speeds are used in the equation and not the exact. As the formula we use is change in velocity divided by the time taken for this change. ...read more.

The pendulum bob must be measured using a vernier scale measure this to the nearest millimetre. Measure the length of the string using the metre rule, again to the nearest millimetre. At first this was done whilst the string was clamped. The metre rule couldn't be next to the string and so was at a slight angle giving a reading fractionally too high, so it was decided to measure the string unclamped and mark it off where we should clamp it, this proved easier and more accurate. The length of the pendulum l is the distance between the fixed point B (the bottom of the two flat pieces of wood) and the centre of mass of the bob A. So this distance is the length of the string used, from the mark to the top of the bob and then half the height of the bob. Next the light gate must be set up. This must be positioned so that the pendulum bob, when at rest blocks the light in the light gate. This is at the equilibrium position when the pendulum has the greatest kenetic energy and so is travelling at it's greatest speed. This should produce easier to analyse results. Then plug it in to the data logging terminal. Set the power supply to the correct voltage of the bulb used in the light gate (3volts). The lights in the room must be turned off for a maximum contrast to the light gate; this will ensure a better graph and greater accuracy. When starting the pendulum swinging simply pull it back at right angles to the light gate to ensure it will not knock it during it's oscillations. Do not pull the string back so that it makes an angle greater than ten degrees from the normal. The data logging terminal should be set to a fixed time and should be able to fit a full oscillation in. ...read more.

This could be proved by doing the experiment again using a different data logger. When measuring the string on the stand it was difficult to get the ruler in line with the string due to obstructions. So the value when clamped in position was slightly higher than that when it was laid out on the ruler. Though when looking at the string used to see if anything else might have made the results inaccurate, the string appeared to be slightly elastic. Maybe when straightening it on the ruler, the string was stretched a little and so again the measurement would be higher than that of when it was on the clamp. Next time a more inextendable string must be used, maybe some sort of wire. There is one value off the line of best fit when l=0.548, this is most likely an anomaly as this error only occurred once. The most probably cause for this anomaly is when the angle the string was pulled back is greater than 5 degrees to the vertical, as the formula is only intended for small angles. Air resistance will have affected the results, this should however have slowed the acceleration down, but the results are a fraction too high. Although the value for g was a too high and there was one anomaly I think the percentage error of just 1.4% shows that these results are quite reliable and this is a good method to conduct an experiment to find the value of g. Conclusion The time gate offered a value of g of 9.99 +/-0.73 of g. The results weren't very reliable so I would say that the second method using the pendulum would be a more reliable experiment. From my graph I have found the value of g to be 9.97ms-2, this is only 1.4% percentage error, if compared to the real value of g, 9.81 ms-2. I think the experiment went well and I have found a close reliable value for g. ?? ?? ?? ?? Peter Legg Determining g 11/04/2007 ...read more.