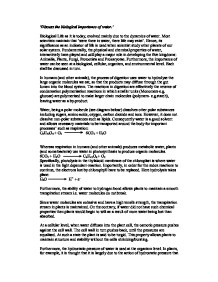 'Discuss the biological importance of water.'

'Discuss the biological importance of water.' Biological Life as it is today, evolved mainly due to the dynamics of water. Most scientists maintain that 'were there is water, there life may exist'. Hence, its significance as an indicator of life is used when scientist study other planets of our solar system. Fundamentally, the physical and chemical properties of water, interactively have played and still play a major role in developing the five kingdoms: Animalia, Plante, Fungi, Protoctista and Prokaryotae. Furthermore, the importance of water can be seen at a biological, cellular, organism, and environmental level. Each shall be discussed in turn. In humans (and other animals), the process of digestion uses water to hydrolyse the large organic molecules we eat, so that the products may diffuse through the gut lumen into the blood system. The reactions in digestion are effectively the reverse of condensation polymerisation reactions in which smaller units (Monomers-e.g. ...read more.

On the contrary, if water did not have such chemical properties then plants would begin to wilt as a result of more water being lost than absorbed. At a cellular level, when water diffuses into the plant cell, the osmotic pressure pushes against the cell wall. The cell wall in turn pushes back, until the pressures are equalised. At such a state the plant is said to be turgid. This property allows plants to maintain structure and stability without the cells shrinking/bursting. Furthermore, the hydrostatic pressure of water is used at the organism level. In plants, for example, it is thought that it is largely due to the action of hydrostatic pressure that fluid travels from sink to source in the phloem and xylem. Also in humans, water plays a key role in transportation. This is seen in the circulatory system and the formation of tissue fluid, where important substance are reabsorbed back into the capillaries (at venous end-due to osmotic effect created by large proteins), with a vital proportion being absorbed into the lymph vessels. ...read more.

Hence for such organisms water has a key role to play at an environmental level. Aquatic life such as fish use water as a medium by which O2 can be obtained. They have evolved specialised exchange surfaces and skilled mechanisms in order to make this process as effective as possible. Furthermore, since water has a high specific heat capacity, this means that its temperature does not tend to fluctuate. Hence for aquatic life their environment temperature is constant. This is crucial especially when one consider the impact an irregular temperature can have on the organism-eg-enzyme denaturing and therefore chemical reactions halting. In conclusion, it may be summarised that the importance of water can be seen in near enough all aspects of biological life. Water, is critical for human survival (and for other organisms). This can be seen when one considers the fact that a person can survive on water for a few days without food but vice-versa cannot (assuming the food is free from water) survive. Put simply, without water Earth would be a whole different place, lost of its present biological life. ...read more.