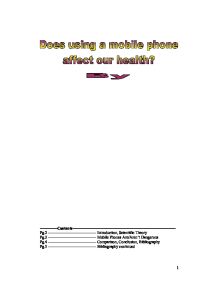 I am doing a case study for physics with the hypothesis “Using a mobile phone affects our health negatively”. I have begun by looking at different websites for the facts. For example The Times article says that “The number of mobiles in Britain has doubled to 50 million since the first government-sponsored report in 2000” and the International Communications Union tells us that “About half of the world’s population has a mobile phone today with mobile phone ownership worldwide topping 3.3 billion at the end of 2007”. This is confirmed below.These are just a few figures that explain how serious this hypothesis is. If it does affect your health negatively, then 3.3 billion people could be at risk. I have also stated my own opinion in a conclusion and 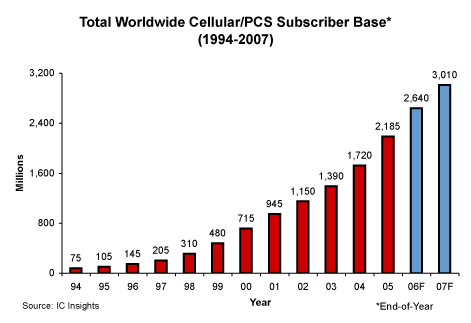 On the electromagnetic spectrum, a mobile phone uses radio waves to transmit signals and send and receive calls, messages, etc. Radio waves are the second weakest type of wave, so would not create much of a risk to the human body, albeit affect the tissue slightly. There is a diagram of the electromagnetic spectrum on the next page. “Mobile phones connect to the base station providing the best signal – usually the nearest. As a person moves away from the base station the signal becomes weaker, so the mobile phone automatically adjusts its own RF field strength to maintain the minimum level needed to communicate with the base station.” – Source: Vodaphone. This means that, according to the argument that mobile phones are dangerous, the farther away that you are from the station the more danger. However, it is not proven whether they are dangerous or not. 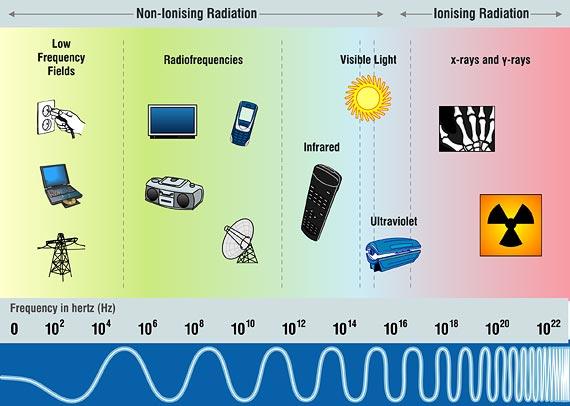 Many people believe that mobile phones really are dangerous and Professor Khurana, a leading neurosurgeon, thinks that they are more dangerous than smoking is. This assumption comes from the fact that 3.3 billion people own a mobile phone worldwide, which is approximately 3 times more than people who smoke. This article is on the independent’s website. Tech-FAQ has a section in one of their articles with a few points on the argument which supports the belief that mobile phones are dangerous. For example, mobile phones operate using electric fields which have been known to damage living tissue, and people who spend long periods of time on their phones have mentioned that they get fatigue and headaches. An article on the BBC’s website claims that mobile phones also increase the damage done if you are struck by lightning, but the real risk is that you wouldn’t have a mobile phone to call for help in an emergency!

However, Tech-FAQ also has a section which supports the belief that mobile Phones are safe, claiming that the electric fields are small and cannot harm living tissue and the fatigue and headaches are likely false because they cannot be proven. There is another article on the BBC stating that mobile phones have not been proven to pose any risk to health, but there is the growing concern of the possibility. It also states that there is an upside to using a phone for long periods in which it speeds up the reaction time to answering questions with a yes or no answer. When it was studied in Bristol on 36 healthy people, there were no signs of effects. Only when there was little signal on their phones did it affect their yes and no answers positively. Cancer Research UK even says that there isn’t a proven link between cancer and mobile phones, and they’re the leading cancer charity.

There is a lot of controversy surrounding this topic. A lot of people believe that the phones will cause damage, but the opposing side proves them wrong, no matter what. It reveals that the fact that mobile phones adversely affect our health cannot be proven. Professor Khurana’s research has been dismissed as “a selective discussion of scientific literature by one individual” by the Mobile Operators Association.

I believe that using a mobile phone does not affect your health in a negative way. There appears to be a small risk if you have it on you in a lightning storm, or if you answer your phone when it’s charging (there was a news report of somebody getting electrocuted by this). I would prefer to wait until I could see concrete proof and evidence before I stop using my mobile. There is no scientific proof that mobiles affect your health negatively, and the risk appears to be all psychological. However this is a topic that will continue to grow and is important to nearly every one of us. I imagine that further studies will be carried out and maybe one day we will get a definitive answer without scaremongering from opposing parties.

Reliability: Probably an unreliable source, as most newspaper articles are written by people who aren’t specialists in the subject. However, the figures it says should be accurate, as they couldn’t have made it up, they probably got it from another source.

Reliability: Another newspaper source, therefore probably unreliable. It could be reliable though, because it is clear they know a lot about Khurana.

Reliability: Not reliable, especially since it says at the beginning that almost everyone worldwide has a mobile, this is false, because only half of the world does. They haven’t got the correct fact here, so I think they probably got other facts wrong too.

Reliability: Reliable. They specialise in trends in the economy, such as phone sales and have been around for a while.

Reliability: A trusted Mobile Phone Company, and would mostly have their facts right. It’s quite reliable.

Reliability: A leading cancer charity, very reliable when proving the link between cancer and phones as false.

Reliability: Trusted, but like most news articles and reports, need to have their facts correct. I am unsure whether they’re reliable or not.

Overall a good attempt. The essay could have been set out in a much neater way to appear more sophisticated and accessible. In addition, the scientific research behind each point examine further, although the wide range of sources used and ...

Overall a good attempt. The essay could have been set out in a much neater way to appear more sophisticated and accessible. In addition, the scientific research behind each point examine further, although the wide range of sources used and the analysis is to a good level. The conclusion is adequate and most of the essay is clear to read.

Whilst the introduction is good, the hypothesis should be set out separately from the introduction. In addition, the introduction is cut short. The candidate should also have cited the sources properly and then used a bibliography, which whilst they have, it should have been cited properly. The argument for and against mobile phones could have been expanded on, and the scientific studies behind the mobile phone theory explored a little deeper. The candidate should have also rejected their hypothesis, but overall a good attempt for this piece.

Grammar, spelling and punctuation are all fine.