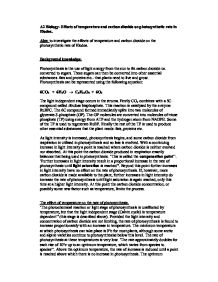 Effects of temperature and carbon dioxide on photosynthetic rate in Elodea.

Modifications: Limitations. * The room temperature may fluctuate. * The concentration of carbon dioxide in the water may be reduced during experiment. * The rate of gas evolution is not consistent. * There are other light sources, which may interfere with the results. * Artificial light will increase temperature, as a 60watt bulb will be used, some energy will be lost as heat energy. * Are the bubbles being observed actually oxygen? Setting up the apparatus and placing it in a water bath may overcome the first error. Doing so will ensure that a constant temperature is maintained throughout the experiment. To avoid other light sources interfering with the experiment shelter the apparatus up so that the pondweed only receives light from the table lamp. To ensure consistency of gas evolution when changing to a new condition, the plant should be equilibrated for at least 10 minutes before taking any readings. Using a dilute sodium hydrogen carbonate solution ensures a constant supply of carbon dioxide to the pondweed, avoiding fluctuation of carbon dioxide concentrations. To test for presence of oxygen simply lower a glowing splint into the test tube containing the gas; if the splint relights this indicates that oxygen is present. Using this test increases reliability of the results. The presence of the lamp may cause the temperature to increase; to prevent this from happening ice can be used to maintain a constant temperature. Further experiments could be implemented to test other factors that may have an affect on the rate of photosynthesis. Light intensity has been found to have an affect on photosynthesis. This can be investigated by placing a light at varying distances from the elodea plant and recording the number of bubbles produced. Other experiments in this area could also include testing the rate of photosynthesis with different amounts of chlorophyll in the plants. ...read more.