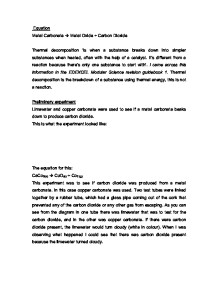 Equation Metal Carbonate --> Metal Oxide + Carbon Dioxide Thermal decomposition 'is when a substance breaks down into simpler substances when heated, often with the help of a catalyst. It's different from a reaction because there's only one substance to start with'. I came across this information in the EDEXCEL Modular Science revision guidebook 1. Thermal decomposition is the breakdown of a substance using thermal energy, this is not a reaction. Preliminary experiment Limewater and copper carbonate were used to see if a metal carbonate beaks down to produce carbon dioxide. This is what the experiment looked like: The equation for this: CaCo3(s) --> CuO(s) + Co2 (g) This experiment was to see if carbon dioxide was produced from a metal carbonate. In this case copper carbonate was used. Two test tubes were linked together by a rubber tube, which had a glass pipe coming out of the cork that prevented any of the carbon dioxide or any other gas from escaping. As you can see from the diagram in one tube there was limewater that was to test for the carbon dioxide, and in the other was copper carbonate. If there were carbon dioxide present, the limewater would turn cloudy (white in colour). When I was observing what happened I could see that there was carbon dioxide present because the limewater turned cloudy. ...read more.

From my graph and my results I can see that the magnesium carbonate produced the most carbon dioxide gas, and calcium carbonate produce the least amount of gas. This is the pattern statement that I got from my graph, 'the stronger the bond the harder I is to break when burnt'. Evaluating When I was actually doing the experiment I tried to keep all but one factor the same. The factor that I changed was the different metal carbonate. Each time I tested each metal carbonate three times and then moved on to another one. From my graph there are many anomalous results. Three things can cause these: 4 Water 5 Amount of metal carbonate 6 Distance the flame is away from the metal carbonate If water gets into the carbonates then it will affect the results making them incorrect. Drying out the carbonates prior to the experiment so this isn't a factor can prevent this. Maintaining the same temperature throughout all the metal carbonates is crucial so that the experiment is fair. A ruler can be used to measure how far it is away from the flame so that the temperature is kept roughly the same all he way through the experiment. My results are not reliable because from my graph there are a lot of anomalous results that indicates something went wrong in the experiment. I think that the reason why the results were how they were was because ...read more.