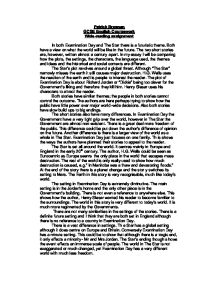 In both Examination Day and The Star there is a futuristic theme. Both have a view on what the world will be like in the future. The two short stories are, however, written almost a century apart. In my essay I will be comparing how the plots, the settings, the characters, the language used, the themes and ideas and the historical and social contexts are different.

The Star’s plot revolves around a global threat. Although “The Star” narrowly misses the earth it still causes major destruction. H.G. Wells uses the reaction of the earth and its people to interest the reader. The plot of Examination Day is about Richard Jordan or “Dickie” being too clever for the Government’s liking and therefore they kill him. Henry Slesar uses his characters to attract the reader.

The short stories also have many differences.

Examination day spotlights one family and the characterisation of all three members is extremely well done e.g. “the anxious manner of her speech” You can see the Mother being worried very easily. This makes the reader able to show emotions towards them, especially Dickie who is made out to be a cute little boy. “He was an alert-eyed youngster, with flat blonde hair and a quick nervous manner.” Although these are the only real characters in the story it mentions some Government workers and another father and son. It says, “the boy left his father’s side reluctantly” This shows the different parenting approaches to the exam as this boy seems to know what the outcome could be and on the other hand Dickie doesn’t.

Again there are not many similarities in the characters in the stories although both authors look at the attitudes by people who know the danger of each situation. E.g. Mr and Mrs Jordan’s towards knowing what could happen to Dickie and in The Star the general public’s view on how the earth could be destroyed.

There are great differences of how the respective authors use characters in their stories. H.G.

In Examination Day there are no old-fashioned ideas in it. However there is an extreme futuristic view in some parts e.g. the automatic stove. This shows how the writer and everybody else in the world looks into the future and sees impossible and amazing technology. This then shows how the writer is writing from the past. Another point from Examination Day could be that it reflects the time period he is writing in. The Government has a very tight grip on the world in the story. This could be a result of Henry Slesar being very familiar with communism, as approximately the time he wrote Examination Day the Cold war was happening. Both stories therefore show signs of being written in the past.