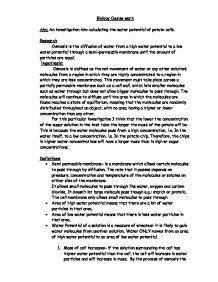 Biology Course work Aim: An investigation into calculating the water potential of potato cells. Research Osmosis is the diffusion of water from a high water potential to a low water potential through a semi-permeable membrane until the amount of particles are equal. Hypothesis: Osmosis is defined as the net movement of water or any other solution� molecules from a region in which they are highly concentrated to a region in which they are less concentrated. This movement must take place across a partially permeable membrane such as a cell wall, which lets smaller molecules such as water through but does not allow bigger molecules to pass through. The molecules will continue to diffuse until the area in which the molecules are found reaches a state of equilibrium, meaning that the molecules are randomly distributed throughout an object, with no area having a higher or lower concentration than any other. For this particular investigation I think that the lower the concentration of the sugar solution in the test tube the larger the mass of the potato will be. This is because the water molecules pass from a high concentration, i.e. In the water itself, to a low concentration, i.e. In the potato chip. Therefore, the chips in higher water concentrations will have a larger mass than in higher sugar concentrations. Definitions * Semi permeable membrane- is a membrane which allows certain molecules to pass through by diffusion. The rate that it passes depends on pressure, concentration and temperature of the molecules or solutes on either side of the membrane. It allows small molecules to pass through like water, oxygen and carbon dioxide. It doesn't let large molecule pass though e.g.: starch or protein. The cell membrane only allows small molecules to pass through * Area of high water potential means that there are a lot of water particles in that area. * Area of low water potential means that there is less water particles in that area. ...read more.

Variables to control are: Room temperature- this could speed up the reaction. An increase in temperature would cause the molecules to move faster and this would react the reaction as it would make it faster, whereas a decrease in temperature would slow down the reaction as it would slow down the movement of the molecules. Time- time will be kept the same so that the time for osmosis to take place is the same for each concentration. Size of potato- surface area would affect the rate of osmosis so having the same area would make sure that I can get fairer results. Volume of solution and concentration of solution- to get fairer results the amount of solution will be kept the same using a measuring cylinder. To create a fair test certain aspects of the experiment will have to be kept the same whilst one key variable is changed. I have chosen to vary the concentration of the sugar solution. This will give me a vary varied set of results from which I hope to make a decent conclusion. If any of the non-variables below are not kept constant it would mean it would not be a fair test. For the purpose of my experiment I am going to do all the experiments at room temperature. To keep the water potential of the potato initially will be kept the same by using the same type of potato, which have been treated in the same way, e.g. have all been cut without being washed and peeled. The mass of the potato is a dependent variable, and this means that it will be measured throughout the experiment. I will measure the mass in grams. The potato chip will be measured before it is put in the solution, and after. This will allow us to see whether osmosis has taken place, and to what extent. The volume of the solution that the potato chips are kept in must be fair. ...read more.

However if I was to repeat the experiment I might well increase the time of the result to allow more osmosis to happen and possibly find out the saturation point of the chips. The range of concentrations was adequate but I would possibly create more concentrations if I repeated the experiment so that I would have more varied results, i.e. 0.10m, 1.15m, 1.20m, and so on. This way would have allowed me to also find out the isotonic point far more accurately as the one that I estimated is very approximate. The cutting of the potatoes was the most difficult part of the experiment as although I was recording my results by mass, it could well have affected the surface area and so the overall rate of osmosis. If I were to repeat the experiment I would have possibly found a machine to cut the potato as it would ensure that all potatoes would be the same weight and dimensions. As well as the potato I could have found a more accurate way to measure out the solutions and to determine the molar concentrations. Perhaps I could have used a burette. This would ensure that I have an accurate amount of fluid in each test tube. I could also weigh each chip on a more accurate scale, e.g. not to 0.00g but to 0.0000g. There were not any out of the ordinary results, but some were not as close to the line as others. This may have been caused by human. When the potato chips were removed from the test tubes and dried I may well have dried some potatoes more thoroughly than others and so some would have more excess water, which would add to the mass. If the experiment was repeated I could find another way to dry the potatoes that would ensure that all were dried in the same way for the same time. However with all this said I think that the experiment was truly successful and I was very pleased with the complete comparison of my results with my initial prediction. ...read more.