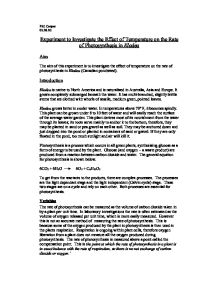 Experiment to Investigate the Effect of Temperature on the Rate of Photosynthesis in Elodea.

Phil Cooper 02.08.02 Experiment to Investigate the Effect of Temperature on the Rate of Photosynthesis in Elodea Aim The aim of this experiment is to investigate the effect of temperature on the rate of photosynthesis in Elodea (Canadian pondweed). Introduction Elodea is native to North America and is naturalized in Australia, Asia and Europe. It grows completely submerged beneath the water. It has multi-branched, slightly brittle stems that are clothed with whorls of sessile, medium green, pointed leaves. Elodea grows better in cooler water. In temperatures above 70� F, it becomes spindly. This plant can be grown under 8 to 10 feet of water and will easily reach the surface of the average water garden. This plant derives most of its nourishment from the water through its leaves; its roots serve mainly to anchor it to the bottom, therefore, they may be planted in sand or pea gravel as well as soil. They may be anchored down and just dropped into the pond or planted in containers of sand or gravel. If they are only floated in the pond, too much sunlight and air will kill it. Photosynthesis is a process which occurs in all green plants, synthesising glucose as a form of energy to be used by the plant. Glucose (and oxygen - a waste product) are produced from a reaction between carbon dioxide and water. The general equation for photosynthesis is shown below. 6CO2 + 6H2O 6O2 + C6H12O2 To get from the reactants to the products, there are complex processes. The processes are the light dependant stage and the light independent (Calvin cycle) stage. These two stages are on a cycle and rely on each other. Both processes are essential for photosynthesis. Variables The rate of photosynthesis can be measured as the volume of carbon dioxide taken in by a plant per unit time. In laboratory investigations the rate is often estimated as the volume of oxygen released per unit time, which is more easily measured. ...read more.

Temperature may have been a factor in that the temperature was not high enough, but as the anomaly was so far out from the average this is an unlikely explanation. The two anomalies from the averages column are said to be anomalous because they do not lie on the line of best fit on the graph. However these points are not very far off the line and do not cause a problem is seeing the pattern from the graph. The point at 15�C on the graph was slightly too high. This could have been because the temperature was too high so the Elodea photosynthesised at a higher rate than it would at 15�C. The possible reason for the temperature difference has been explained above. Also at this point, there may have been a greater amount of stray light reaching the Elodea so the light intensity increased, increasing the rate of photosynthesis. However this is an unlikely possibility as the amount of stray light seemed to stay approximately the same throughout the experiment. However the light intensity was an immeasurable quantity so it is not possible to decide exactly how much of an affect it had. The point at 25�C on the graph was slightly to low. This could have been due to gas escaping as previously explained. The temperature may have been slightly too low as the water strayed towards room temperature. This would cause a decrease in the rate in photosynthesis of Elodea. Also the light intensity may have been slightly less than the average throughout the experiment but as mentioned above this is an immeasurable quantity. All of the improvements suggested for this experiment would undoubtedly improve the accuracy of the experiment and thus the reliability of the conclusions. However the graph shows a clear pattern of results and allows for a firm conclusion to be made. The results are accurate enough to make a reliable conclusion, so it can be said that the method used for this experiment was suitable. ...read more.