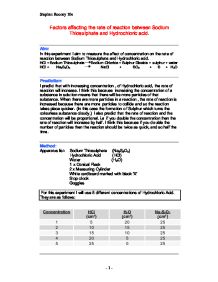 Factors affecting the rate of reaction between Sodium Thiosulphate and Hydrochloric acid.

Another possibility is that my eyesight was not that great at times and I may have missed the 'X', when I should have seen it, and stopped the timer. Or if I just didn't check to see the 'X' accurately. I believe that if I were to do this experiment again with more accurate equipment (such as a light meter rather than a cardboard marked with a 'X' or more accurate measuring equipment), or if I spent more time being accurate, then the results would be different. I think that they would all be closer to the line of best fit. I also think that the results would show that the rate of reaction and concentration are proportional like I originally predicted. If I were to do this again then I would like to investigate the rate of formation of Sulphur in a similar way to the rate of reaction of this solution. However, despite the imperfections of this experiment, I believe that my results were clear enough to support at least part of my conclusion, namely the relation between rate of reaction and concentration. It was not good enough though, to prove that the rate of reaction and concentration are proportional as I predicted. Stephen Rooney 10s - 2 - ...read more.