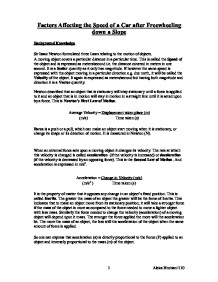 Force is a push or a pull, which can make an object start moving when it is stationary, or change its shape or its direction of motion. It is measured in Newton (N).

It is the property of matter that it opposes any change in an object’s fixed position. This is called Inertia.

The trolley was placed at the top of the runway and released when the ticker timer was started. The ticker timer was stopped when the trolley was stopped at the end of the flat ramp.The tape was removed and measured from the start of the regular interval dots; this was placed at the beginning of the flat ramp and marked off one metre down the flat ramp.The number of dots in that marked off section was counted and the number recorded. This would then be used to calculate the speed.The trolley was then raised to 50cm in the same way as before.The experiment was then repeated at 50cm height and the results recorded as before.

The results of this investigation are displayed below.

After looking at the results I decided to keep the runway at 50 cm as this gave a better speed-readings. I felt this height would be preferable for my final experiment as a small error in higher readings is less likely to show effect and than those with low readings. It would also allow me to chart the graph better with high readings.

MASS OF THE TROLLEY

As a further experiment, I could see how other factors like surface of the runway; type of trolley, mass of trolley and contact area would affect the speed of the trolley when one factor is made variable for one set of experiment.

To see if friction between the runway and the wheels of the trolley make any difference, I could use carpet lined runway for high resistance due to more unrefined fibres and a perpex or glass runway for low resistance due to its smoother surface. The rougher surface will provide more friction and thus allow me to see the extant to which it will slow down the trolley.

To see the effect of mass I can use a large and a small trolley of different mass, instead of adding mass into the trolley, and see how it affects the speed as to whether the speed is increased by a greater mass as compared to a smaller mass.

These further experiments will show which other factors that affect the speed of a trolley when released from a height.