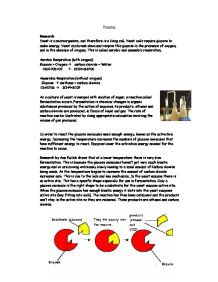 Fermentation, is chemical changes in organic substances produced by the action of enzymes

Planning Research Yeast is a microorganism, and therefore is a living cell. Yeast cells require glucose to make energy. Yeast can break down and respire this glucose in the presence of oxygen, and in the absence of oxygen. This is called aerobic and anaerobic respiration. Aerobic Respiration (with oxygen) Glucose + Oxygen --> carbon dioxide + Water C6H1206+02 --> 6C02+6H206 Anaerobic Respiration (without oxygen) Glucose --> methane + carbon dioxide C6H1206 --> 3CH4+3C02 As a culture of yeast is merged with solution of sugar, a reaction called fermentation occurs. Fermentation is chemical changes in organic substances produced by the action of enzymes. As products, ethanol and carbon dioxide are produced, in forms of liquid and gas. The rate of reaction can be illustrated by doing appropriate calculation involving the volume of gas produced. In order to react the glucose molecules need enough energy, known as the activation energy. Increasing the temperature increases the numbers of glucose molecules that have sufficient energy to react. Enzymes lower the activation energy needed for the reaction to occur. Research by Ann Fullick shows that at a lower temperature there is very slow fermentation. ...read more.

By keeping these things constant will ensure that the experiment is totally fair. I will repeat my experiment 3 times in order to obtain reliable and fair results. This is very important as the bubble counting may be unreliable as its counting by a person manually so by repeating the experiment will make the result more accurate. This will help me find the average, which will reduce the risk of anomalies. Obtaining evidence Method For my investigation I will be altering the temperature of the yeast and sucrose is and observing how much carbon dioxide is released by counting the bubbles. -I Put 80cm� of yeast in a test tube and 80cm� of sucrose in separate test tube. -I heated 100cm� of water to the temperature, which I was testing -I put both the test tubes containing yeast and sucrose in the water and put thermometers in each of them, then I waited until they settled to the temperature I was testing. -I Attached the two tubes together quickly to try and not let any gas escape, then observed the amount of bubbles produced and recorded my results every 10 seconds for 1 minute. ...read more.

I would have also used larger scale of temperatures so my results would be more reliable. I do not believe that counting the bubbles was a reliable method, because sometimes the bubbles were being released too quickly to count all of them, and the size of the bubbles were not taken into consideration, only the amount of bubbles. I think to improve this you could use a gas syringe to measure the amount of gas produced or put a balloon over the neck of the bottle so you can visually see how much gas is produced. I also think in the higher temperatures some of the bubbles would not be carbon dioxide but because of the higher temperatures they could be from the heat. I believe the results could have been slightly off, by human errors, however if I was to repeat the experiment I would be more careful. If I was to carry out more experiments I could use different concentrations of yeast, or use different pressures and temperatures. To conclude, I believe that I carried out the experiment well and completed my method accurately, fairly and safely. However the results I obtained were not as I predicted and as a result I would like to repeat the experiment with a longer time span, to give the enzymes time to denature at higher temperature. ...read more.