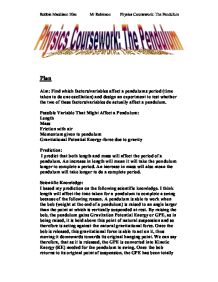 Plan Aim: Find which factors/variables affect a pendulums period (time taken to do one oscillation) and design an experiment to test whether the two of these factors/variables do actually affect a pendulum. Possible Variable That Might Affect a Pendulum: Length Mass Friction with air Momentum given to pendulum Gravitational Potential Energy-force due to gravity Prediction: I predict that both length and mass will affect the period of a pendulum. An increase in length will mean it will take the pendulum longer to complete a period. An increase in mass will also mean the pendulum will take longer to do a complete period. Scientific Knowledge: I based my prediction on the following scientific knowledge. I think length will affect the time taken for a pendulum to complete a swing because of the following reason. A pendulum is able to work when the bob (weight at the end of a pendulum) is raised to an angle larger than the point at which is vertically suspended at rest. By raising the bob, the pendulum gains Gravitation Potential Energy or GPE, as in being raised, it is held above this point of natural suspension and so therefore is acting against the natural gravitational force. Once the bob is released, this gravitational force is able to act on it, thus moving it downwards towards its original hanging point. We can say therefore, that as it is released, the GPE is converted into Kinetic Energy (KE) ...read more.