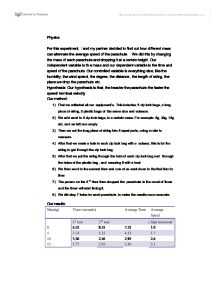 For this experiment, I and my partner decided to find out how different mass can alternate the average speed of the parachute.

Physics For this experiment, I and my partner decided to find out how different mass can alternate the average speed of the parachute. We did this by changing the mass of each parachute and dropping it at a certain height. Our Independent variable is the mass and our dependent variable is the time and speed of the parachute. Our controlled variable is everything else, like the humidity, the wind speed, the degree, the distance, the length of string, the place we drop the parachute etc. Hypothesis: Our hypothesis is that, the heavier the parachute the faster the speed/ terminal velocity Our method: 1) First we collected all our equipment's. This includes: 5 zip lock bags, a long piece of string, 5 plastic bags of the same size and scissors. 2) We add sand to 5 zip lock bags, to a certain mass. ...read more.

The mass that weighs the sand may not be totally correct as well. There may've been some technical problems that we won't know about. Not every single machine is perfect. A very obvious human error will be that the person that was timing may not have pressed the start button exactly when the other person was dropping it. This error is extremely hard to improve, we tried to make it as accurate as possible by keeping the same person timing and dropping. We also shouted 3, 2, 1 and we would either drop or press the start button. A way to improve this is by doing more tests. Overall I think our experiment was pretty successful, although there were some weird results. We did our best to make this a fair experiment as mentioned above and we could've improved quite a lot of factors. If I could've done this experiment again, I would find a day that has hardly any wind and a place where there aren't objects in the way. ?? ?? ?? ?? ...read more.