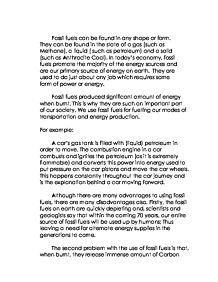 Fossil fuels can be found in any shape or form. They can be found in the state of a gas (such as Methane), a liquid ( such as petroleum) and a solid (such as Anthracite Coal). In today's economy, fossil fuels promote the majority of the energy sources and are our primary source of energy on earth. They are used to do just about any job which requires some form of power or energy. Fossil fuels produced significant amount of energy when burnt. This is why they are such an important part of our society. We use fossil fuels for fuelling our modes of transportation and energy production. ...read more.

Firstly, the fossil fuels on earth are quickly depleting and, scientists and geologists say that within the coming 70 years, our entire source of fossil fuels will be used up by humans; Thus leaving a need for alternate energy supplies in the generations to come. The second problem with the use of fossil fuels is that, when burnt, they release immense amount of Carbon Dioxide into the environment. This issue has been impacting the world greatly over the past 50 years (mostly) and if the economy continues this path of destruction, then the earth will turn into our garbage can. ...read more.

Hydrogen can be produced from a variety of resources and is a by-product of other chemical processes. Unlike electricity, large quantities of hydrogen can be easily stored to be used in the future. Hydrogen can also be used in places where it's hard to use electricity. Hydrogen can store the energy until it's needed and can be moved to where it's needed. There are 8 main types of renewable energy. They are: * Biomass * BioFuels * Geothermal * Hydro-Power * Solar Power * Tidal Power * Wave Power * Wind Power Renewable energy is a much safer, cleaner source of energy. It is from natural resources, such as sunlight or wave power from oceans or rivers. The majority of renewable energy technologies are directly or indirectly powered by the sun. ...read more.