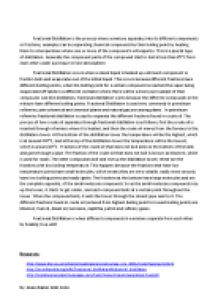 ï»¿Fractional Distillation is the process where a mixture separates into its different components or fractions, examples can be separating chemical compounds by their boiling point by heating them to a temperature where one or more of the compound's will vaporize. This is a special type of distillation. Generally the component parts of the compound start to boil at less than 25°C from each other under a pressure of one atmosphere. Fractional Distillation occurs when a mixed liquid is heated up until each component or fraction boils and evaporates out of the initial liquid. ...read more.

The fractions at the bottom have large molecules and are the complete opposite, of the small molecule compounds. So as the small molecule compounds rise up the tower, it starts to get colder, and each compound boils at a certain point throughout the tower. When the compound boils, it exits the tower through the closest pipe next to it. The different fractions found in crude oil (ordered from highest boiling point to lowest boiling point) are bitumen, fuel oil, diesel oil, kerosene, naphtha, petrol and refinery gases. Fractional Distillation is when different compounds in a mixture separate from each other by heating it up until Resources: http://www.bbc.co.uk/schools/gcsebitesize/science/aqa_pre_2011/rocks/fuelsrev3.shtml http://en.wikipedia.org/wiki/Fractional_distillation#Industrial_distillation http://jonathoncampbell.hubpages.com/hub/Crude-Oil-and-Separating-CrudeOil http://answers.ask.com/Science/Chemistry/how_does_fractional_distillation_work By: Abdul Rahim Altiti 10AA ...read more.