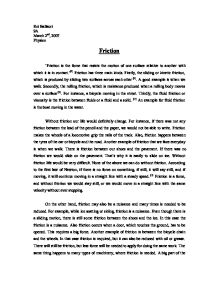 Friction and its issues.

‘Friction is the force that resists the motion of one surface relative to another with which it is in contact.’[1] Friction has three main kinds. Firstly, the sliding or kinetic friction, which is produced by sliding two surfaces across each other [2]. A good example is when we walk. Secondly, the rolling friction, which is resistance produced when a rolling body moves over a surface [2]. For instance, a bicycle moving in the street. Thirdly, the fluid friction or viscosity is the friction between fluids or a fluid and a solid. [2] An example for fluid friction is the boat moving in the water.

Without friction our life would definitely change. For instance, if there was not any friction between the lead of the pencil and the paper, we would not be able to write.

[3] Friction is a force, and without friction we would stay still, or we would move in a straight line with the same velocity without ever stopping.

n in contact with the car, may damage it by oxidising parts of the car. There are also some special chains for the tyres of cars, which provide friction. So in an ethical consideration, friction is balanced between nuisance and usefulness.