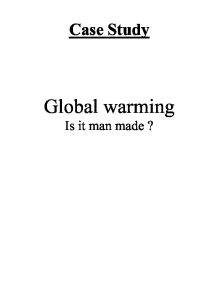 Global Warming - Is it man Made? 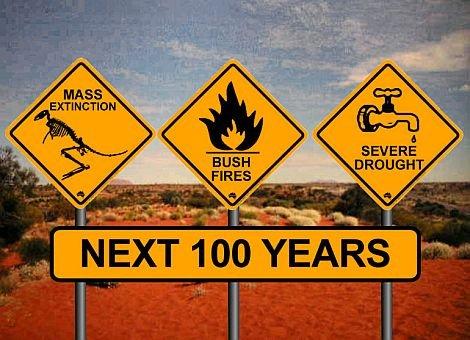 Global warming – Is it man made ?:

I will discuss in this case study using information and scientific testify about global warming. I will explain, what is global warming? What causes it? And what protects it against a drastic increase? I would like to present both scenarios, in chapter 7 – what happens if ….

I will describe in detail each source.

Professor Nigel Weiss, Emeritus Professor in Mathematical Astrophysics at Cambridge, has affirmed the announcement by scientists that global warming is primarily a man-made problem and has nothing to do with natural changes.

The reason why I choose this topic is simple.

The whole world is worried about climate change. But few are well informed about this topic. These few people know exactly what happened to the world.

I would like to explain what exactly happens to our world.

It is my world. It's your world. It is our world. We all have to do something, to save our earth.

"People need solutions that are realistic and practical at the same time as moving into the direction of radical change."

(Tony Blair to the Japanese Prime Minister Yasuo Fukuda on 27. June 2008 in Tokyo.)

Chapter 2 – What is Global warming ? 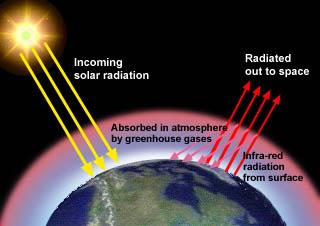 So the key question is 'what is global warming?'. Global warming is what happens when the temperature of the earth increases.

Scientists have found out trough fossils, that the sea level rises faster than at any time in the past 2,100 years.

It is at least one fact, that some places have become smaller  on many islands like the beaches. The sand is at times highly degraded, so that often sand bags to use, to stop the "waves" a little bit. 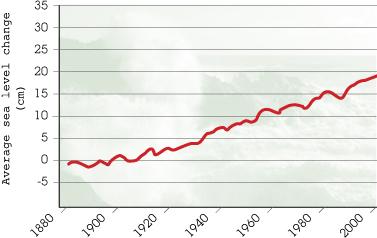 2001: St. Mark's Square attracts the biggest crowds in one of the world's most popular tourist cities, Venice.

Now: High water. Venice has always been at risk of flooding , but man-made changes to the lagoon, and rising global sea levels, have greatly increased the danger.

My last topic of this chapter is about the retreat of glaciers. This happens also because the high temperatures.

Worldwide, glaciers are melting. Whether in the Alps, in the Arctic, the Antarctic and in Africa. Where once-powerful tongues of ice pushed into the valleys, cover today in many places, only rubble and debris of the ground. But the ice giants have one enemy: the man-made climate change. According the latest Greenpeace study the glaciers are shrinking faster and faster. According to a study by NASA in 2005 was the year with the highest average temperature for 100 years. The five warmest years since the beginning of the temperature record are in the last decade.
Especially threatening: the mountain and polar regions warm more than other areas.

(A reliable source because it's a newspaper website. The report is examined to its correctness.)

(This picture source is biased, as it don't tell about the source.)

(This is a reliable source because it's a published source.)

(Greenpeace is a charity like WWF. The Source is reliable. Also because they indicated where they themselves have the information. The source it is based on facts.)

(A reliable source, because it's based on facts. More than, it is a goverment website.)

(A reliable source, because of their reputation over many decades. It's the same reputation that The New york times newspaper has. Both are not perfect, but they are conscientious in trying to be honest and factual.)

(The source is reliable. They tell about themselves in the rubric “about us”. The http://www.theozonehole.com website is internationally known as the top destination on the Internet on ozone related issues. The Ozone Hole website won a Montreal Protocol 20th Anniversary Public Awareness Award from The United Nations on September 16,2007.)

(Reliable. It's an government website. U. S. Environmental Protection Agency)

(This source i biased, because it has no information. It's just based on assumptions)

(I don't think that this Source is realiable because it doesn't tell about facts.)