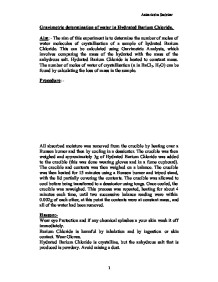 If soot formed on the crucible its mess would be changed, making the results inaccurate. Dirt could have been transferred from the tongs to the crucible while it was being lifted, again this would affect the mass of the crucible. This error would have been eliminated had clean tongs been used. The Barium Chloride had to be heated to constant mass to ensure that all traces of water had been removed to reduce errors in the calculation. Gravimetric analysis is more accurate than volumetric analysis because the only error in gravimetry should be weighing error so the results are as accurate as the balance used. Improvements could have been made by using a more accurate balance and also by calibrating the balance. ?? ?? ?? ?? Aakanksha Sadekar 1 ...read more.