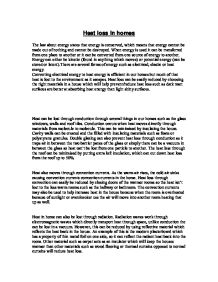 The law about energy states that energy is conserved, which means that energy cannot be made out of nothing and cannot be destroyed. When energy is used it can be transferred from one place to another or it can be converted from one source of energy to another. Energy can either be kinetic (found in anything which moves) or potential energy (can be stored or latent).There are several forms of energy such as electrical, elastic or heat energy.

Converting electrical energy to heat energy is efficient in our homes but much of that heat is lost to the environment as it escapes. Heat loss can be easily reduced by choosing the right materials in a house which will help prevent/reduce heat loss such as dark matt surfaces are better at absorbing heat energy than light shiny surfaces.

Heat in home can also be lost through radiation. Radiation waves work through electromagnetic waves which directly transport heat through space, unlike conduction the can be lost in a vacuum. However, this can be reduced by using reflective material which reflects the heat back in the house.

Furniture such as wardrobes, shelves can be placed against the outside walls to reduced the contact of warm air with the cool walls.

Heat can be gained in the garden through polished concrete, tile or slate floors and brick walls, which will help absorb the heat in the day and release it slowly at night.