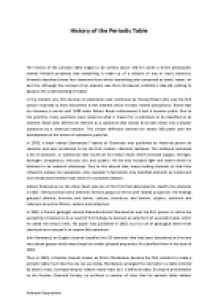 History of the Periodic Table

﻿History of the Periodic Table The history of the periodic table began to be written about 330 B.C when a Greek philosopher named Aristotle proposed that everything is made up of a mixture of one or more elements. Aristotle described those four elements from which everything was composed as earth, water, air and fire. Although the concept of an element was thus introduced, Aristotle?s idea did nothing to advance the understanding of matter. In the modern era, this journey of exploration was continued by Hennig Brand who was the first person recorded to have discovered a new element which he later named phosphorus. Brand kept his discovery a secret until 1680 when Robert Boyle rediscovered it and it became public. ...read more.

Also, Lavoisier?s description only classified elements as metals and non-metals and therefore was short of a complete analysis. Johann Dobereiner on the other hand was one of the first that attempted to classify the elements in 1817. He found that some elements formed groups of three with related properties. His findings grouped chlorine, bromine and iodine, calcium, strontium, and barium, sulphur, selenium and tellurium as well as lithium, sodium and potassium. In 1862, a French geologist named Alexandre-Emile Chancourtois was the first person to notice the periodicity of elements. As a result of his findings, he devised an early form of a periodic table, which he called the telluric helix. His paper was published in 1862, but his use of geological rather than chemical terms caused it to receive little attention. ...read more.

At the time that Mendeleev presented his periodic table, also known as ?Mendeleev?s table of periodicity?, other scientists like Lothar Meyer and William Odling were also working on a periodic table. In the years that followed, the periodic table was modified on numerous occasions to accommodate the newly discovered elements. In 1914, Henry Moseley found a relationship between an element?s X-ray wavelength and its atomic number. As a result, he resequenced the periodic table by nuclear charge rather than atomic weight. Before this discovery, atomic numbers were just sequential numbers based on an element?s atomic weight. In 1943, Glenn Seaborg who worked on the Manhattan Project research experienced unexpected difficulty in isolating two elements. This made him wonder whether these elements belonged to a different group. Finally, in 1945 he went against the advice of his colleagues and proposed a significant change to the periodic table that was implemented soon after. ...read more.