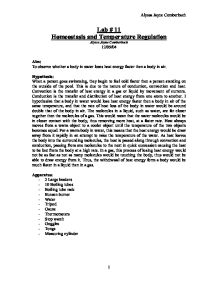 Lab # 11 Homeostasis and Temperature Regulation Alyssa Jayne Comberbach 12/09/04 Aim: To observe whether a body in water loses heat energy faster then a body in air. Hypothesis: When a person goes swimming, they begin to feel cold faster then a person standing on the outside of the pool. This is due to the nature of conduction, convection and heat. Convection is the transfer of heat energy in a gas or liquid by movement of currents. Conduction is the transfer and distribution of heat energy from one atom to another. I hypothesize that a body in water would lose heat energy faster then a body in air of the same temperature, and that the rate of heat loss of the body in water would be around double that of the body in air. The molecules in a liquid, such as water, are far closer together then the molecules of a gas. This would mean that the water molecules would be in closer contact with the body, thus removing more heat, at a faster rate. Heat always moves from a warm object to a cooler object until the temperature of the two objects becomes equal. ...read more.

34.2 This shows that the boiling tubes lost an average of 9.3�C in four minutes in air and 34.2�C in four minutes in water. Rate of loss: The rate of loss is the speed at which heat is lost in either condition. AIR: 9.3 �C 4 mins = 2.33 �C/min (or 0.039 �C/sec) WATER: 34.2 �C 4 mins = 8.55 �C/min (or 0.14 �C/sec) Conclusion: From this experiment it is obvious that the average rate of heat loss from a body is far greater in water then it is in air. The theories of conduction and convection being the cause for this rapid loss of heat energy are therefore correct. Surrounded by water, a body is bombarded by molecules of water which remove heat energy from the body through conduction, and pass it along to the neighboring molecules in an attempt to equalize the temperatures of the body and the water. At the same time the heat that is removed from the body is passed through convection throughout the water body, causing more of the cooler molecules to move into positions where they can obtain heat, thus causing the rate of heat loss to be rapid. ...read more.

When we go swimming we generally remain in the pool (which is around room temperature) for at least half an hour, if the rate of heat loss obtained from this experiment were true for humans, we would freeze before the half hour were over. Thus it is unrealistic to think that these values are valid in our everyday lives. They may be valid for this experiment but cannot be generalized. This experiment could be improved in many ways. One of which would be to use plastic covers on the open mouths of the boiling tubes so that as little heat as possible is lost through the lid, especially in the case of the boiling tubes in water. Another way in which we could improve this experiment would be to only do one boiling tube at a time, ensuring that no two boiling tubes heat each other up, thus slowing the rate of heat loss. Starting all boiling tubes at the same temperature would also increase the simplicity of the readings of this experiment, making it easier to compare the results obtained and the readings. ...read more.