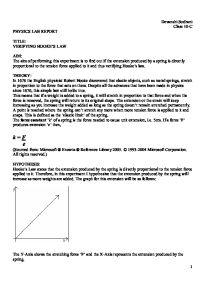 In 1676 the English physicist Robert Hooke discovered that elastic objects, such as metal springs, stretch in proportion to the force that acts on them. Despite all the advances that have been made in physics since 1676, this simple law still holds true.

This means that if a weight is added to a spring, it will stretch in proportion to that force and when the force is removed, the spring will return to its original shape. The extension or the strain will keep increasing as you increase the weight added as long as the spring doesn’t remain stretched permanently.  A point is reached where the spring can’t stretch any more when more tension force is applied to it and snaps. This is defined as the ‘elastic limit’ of the spring.

Hooke’s Law states that the extension produced by the spring is directly proportional to the tension force applied to it.

Table to calculate the spring constant for spring 1:

The pointers of the springs were not exactly horizontal thus causing the measurements to be slightly incorrect.It was not possible to take all the readings at eye-level thus causing parallax errors.Since the pendulum was oscillating too much, I had to use my hand to hold the spring steady.The ruler attached to the clamp stand to make the experiment more efficient. However, it was not in a straight line thus causing some inaccuracy in measurements. This would have caused extra force to be applied and the exact measurements could not be taken.All the weights were assumed to be 100g and their exact weight was not taken. Thus it is possible that extra or inadequate force may have been applied.

From the experiment performed above, it can be concluded that the Hooke’s law holds true for a metal spring. This is because the extension produced by the spring is directly proportional to the force applied on it. For the first spring, the results obtained are not very accurate due to the sources of errors identified above. However, the second spring gave very accurate results as I had hypothesized according to the theory. Therefore, this experiment is a reliable way of verifying Hooke’s law using a metal spring.