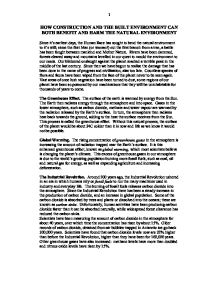 Since it’s earliest days, the Human Race has sought to bend the natural environment to it’s will; since the first Man (or woman!) cut the first branch from a tree, a battle has been fought between mankind and Mother Nature.  Rivers have been dammed, forests cleared away and mountains levelled in our quest to mould the environment to our needs.  Our blinkered onslaught against the planet reached a terrible peak in the middle of the last century.  Since then we have begun to realise the damage that has been done in the name of progress and civilization, alas too late.  Countless species of flora and fauna have been wiped from the face of the planet never to be seen again. Vast areas of once lush vegetation have been turned to dust, some regions of our planet have been so poisoned by our machinations that they will be uninhabitable for thousands of years to come.

The Greenhouse Effect.  The surface of the earth is warmed by energy from the Sun.  The Earth then radiates energy through the atmosphere and into space.

In the UK we can expect to experience much more of the flooding we have seen in recent years.  Our summers are likely to be hotter and drier, while the winters become much more wet and windy.

Sea levels are likely to rise by as much as 200mm in the next 20 years.  This may not sound like much but we will see an increase in coastal erosion and flooding as a result; especially on the East Yorkshire coast where the boulder clay cliffs are particularly susceptible.

The dramatic swing between dry summers and very wet winters will have a marked effect on soil and local habitats; we can expect more frequent shortages of water in summer months, which are likely to coincide with a higher demand for water services.  Farmers may have to adapt the crop they sow to the drier soils we can expect, as the land may be unable to support traditional plants and trees.

The gradual loss of wetlands such as marshes, reed-beds and peat lands will devastate populations of wildlife that inhabit them; many of the species which do survive may be forced to migrate in search of ever-dwindling habitats.

The Impact of the Built Environment

While the world population continues to expand at a terrific rate, life expectancies lengthen, and habitable land area becomes less and less due to global pollution issues such as rising sea levels and changing habitat, the burden on the planet intensifies as areas are developed for habitation.

Our planet is taxed almost to breaking point by the burden placed upon it by civilization; every citizen of Planet Earth requires these basic commodities to survive:

It seems evident that the way staff feel about their working environment is as likely to have an effect on their health at work as the physical construction of the building itself.  The conclusion that can be drawn from this observation is that SBS is about people.  The occupants of a building need to feel that they are involved in the creation and control of their own environment.

Radon Gas – A colourless, odourless gas that occurs naturally in rocks below the ground.  It can slowly filter through to the surface and accumulate inside buildings and is a cause of lung cancer.

There are measures reduce the effects of Radon gas (outlined in Building Regulations, Approved Document C).  These are:

Legionella – Also known as ‘Legionnaires Disease’, this is caused by bacteria which breed rapidly in warm water (such as in air-conditioning systems).  These bacteria release airborne particles, which cause pneumonia-like symptoms, often fatal if contracted by the elderly.

Legionella can be easily avoided by regular maintenance of air-conditioning and heating systems; systems which are operating correctly are usually operating at temperatures that are too high for the legionella bacteria to breed in.