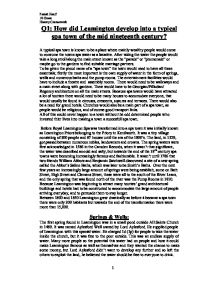 How did Leamington develop into a typical spa town of the mid nineteenth century?

Q1: How did Leamington develop into a typical spa town of the mid nineteenth century? A typical spa town is known to be a place where mainly wealthy people would come to consume the towns spa water as a laxative. After taking the water the people would take a long stroll along the main street known as the "parade" or "promenade" or maybe go to the gardens to find suitable marriage partners. To be given the proud name of a "spa town" the town would need to have all these essentials; firstly the most important is the own supply of water in the form of springs, wells and numerous baths and the pump rooms. The entertainment facilities would have to include a theatre and assembly rooms. There would need to be walkways and a main street along with gardens. There would have to be Georgian/Pilladian/ Regency architecture on all the main streets. Because spa towns would have attracted a lot of tourism there would need to be many houses to accomodate everyone, that would usually be found in circuses, crescents, sqaures and terraces. There would also be a need for grand hotels. Churches would also be a main part of a spa town, as people would be religious, and of course good transport links. All of this could never happen to a town without the odd determined people who invested thier lives into making a town a succesfull spa town. Before Royal Leamington Spa was transformed into a spa town it was initially known as Leamington Priors belonging to the Priory in Kenilworth. It was a tiny village consisting of 300 people and 67 houses until the era of the 1800's. The land, in 1529, got passed between numerous nobles, landowners and crowns. The spring waters were first acknowledged in 1586 in the Camden Records, when it wasn't that significant, the water was described as cold and salty, but towards the end of the 18th century spa towns were becoming increasingly famous and fashionable. ...read more.

The walkway was laid out next to the Pump Rooms. Montpellier Walk had many shop fronts, which were divided by statues. They were designed in 1840. This would have given the walkway a much stronger architectural feel to it, and the visitors town would have really enjoyed spending their time studying them. Below is a picture of the Imperial Gardens. It is very similar to Jephson Gardens in Leamington Spa, as there is much greenery for people to see, and a quiet place to relax. The Imperial Gardens in Cheltenham. The Gardens and walkways in a spa town are essential because after consuming the water, people enjoyed taking walks around the town, and the gardens needed to be spectacular soothe tourists would enjoy their stay and come back again. Main Street/Promenade: There is one main street in Leamington, which is the parade; this is the place where the young, hopeful women would stroll after taking the waters to find suitable husbands. A street map of Royal Leamington Spa Whereas Leamington only had one main street Bath had four; Grand Parade, North Parade, South Parade and the Queens Parade. The parades were also very much vital as these were the streets the young and hopeful could search for their marriage partners. Gentry would also come to Cheltenham and stroll along the Promenade and the Montpellier for marriage hopefuls. The parades or promenades were the essential roads for seeking husbands or wives. These streets would be used to stroll along in your finest clothing and try to tempt others into marriage. The architecture on these streets would be very elegant and stylish so to fit in with the wealthy peoples manner. Important Individuals & Developers: There were many important people involved in the developing of Leamington Spa, including Lord Aylesford, Benjamin Satchwell, William Abbotts, Bertie Greatheed and the Willes family. Both William Abbotts and Benjamin Satchwell were responsible for the commercialising of the spa water so people all over the country new of the of the water and would come to taste it. ...read more.

Napoleon III came and bought a house on Clarendon Square for his family to live in, and he also bought the house right next door for his servants to stay. Leamington had continuous visits from Charles Dickens who would come and deliver lectures at the assembly rooms. Leamington Spa was renamed Royal Leamington Spa on 19th July 1838 due to a visit from royalty. Bath had a lot of royalty who came to visit the town including Queen Anne who was thought to be infertile, but after bathing in the waters of the Cross Bath conceived and gave the King an heir to the thrown Prince William of Orange visited and Gravel Walk was renamed Orange Grove in respect to the Prince. Queen Mary and Princess Victoria also are some royalty who visited the town. Cheltenham didn't receive as many royal visits as Leamington and Bath did, but hey did get a visit from George III and Queen Charlotte in the 1780's. Conclusion: The main factor that helped Leamington Spa convert from a normal tiny village to a magnificent spa town with it's glorious architecture was the important individuals who gave up most of their time and money to invest into making this town succeed as a spa resort. Without the help of Lord Aylesford, William Abotts and Benjamin Satchwell, Dr Jephson, Dr Hitchman and C.S Smith maybe the place we live in today might have still been that tiny village over 500 years ago. The doctors are mostly to thank because they were the ones that the population listened to saying that spa water is great to clean the body of harmful substances. I also think that if it wasn't for the important and famous people who visited Leamington may not have been as big as it is today, because back in the day when spa towns were fashionable people would usually flock to the places that important people went to see what was there to make those famous people go. Farrah Hanif 10 Green History Coursework 1 ...read more.