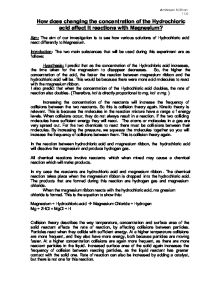 How does changing the concentration of the Hydrochloric acid affect it reactions with Magnesium?

I have decided to start readings at 20OC and increase by 10OC each time until 60OC is reached, since it will allow me to see the increase in rate of reaction and 5 results should be enough to identify any trends. * Rates of Reaction Increasing the temperature increases the speed of the particles. The faster the particles move, the greater the number of collisions, and therefore the rate of the reaction increases. A 10OC rise in temperature almost doubles the rate of most reactions. Chemical reactions take place by chance. Particles need to collide with enough velocity so that they react. As the temperature is increased the particles move faster since they have more energy. This means that they are colliding more often and more of the collisions have enough velocity to cause a reaction. Since there are more collisions the chemical reaction takes place faster. A tangent was drawn at the beginning of each curve and its gradient calculated, the gradients are shown in the table below. Evaluating Evidence I believe that the experiment was successful but some of the results were unexpected/unreliable. The lines on the graphs for 20OC and 30OC cross, this doesn't affect my results since I am only concerned with the initial rate or reaction but it was unexpected. In graph 3 the rate of reaction for 60OC is lower than that of 50OC - this result is anomalous and has been ignored in this investigation. I believe that the experiment was designed well but there were a few problems. Although the initial rate of reaction (which is what I am concerned with in this investigation) seemed to fit a trend, the rate of reaction curves of some temperatures on the graphs crossed. This could have been because some of the magnesium had corroded forming a magnesium oxide layer which would have affected the rate of reaction. Other factor which could have given me unreliable results could have been that the gas syringes were wet causing them to ...read more.

The graph gives us a good device to prove that if you double the concentration the rate would also double. If you increase the number of particles in the solution it is more likely that they will collide more often. There should be more H2 given off if we compare it across the range of temperatures because the reaction is going quicker and so more H2 is given off in that amount of time. There is more H2 given off if you compare it to the range of concentrations that you are using, this shows that the reaction is at different stages and so is therefore producing different amounts of H2. Also our results were not accurate but this could be because of a number of reasons. There our many reasons why our results did not prove this point accurately. � At high temperatures the acid around the magnesium starts to starts to dilute quickly, so if you do not swirl the reaction the magnesium would be reacting with the acid at a lower concentration which would alter the results. � Heating the acid might allow H Cl to be given off, therefore also making the acid more dilute which would also affect the results. � When the reaction takes place bubbles of H2 are given off which might stay around the magnesium which therefore reduces the surface area of the magnesium and so the acid can not react properly with it so this affects the results. To get more accurate results, we could have heated the acid to a lower temperature to stop a large amount of H Cl being given off. The other main thing that could have helped us to get more accurate results is we cold have swirled the reaction throughout it to stop the diluting of the acid and the bubbles of H2 being given off. If I had time I could have done the reactions a few more times to get a better set of results. This would have helped my graphs to show better readings ...read more.