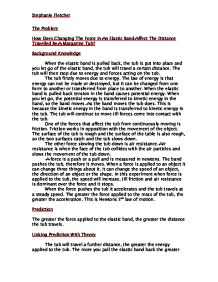 How Does Changing The Force In An Elastic Band Affect The Distance Travelled By A Margarine Tub?

One of the forces that affect the tub from continuously moving is friction. Friction works in opposition with the movement of the object. The surface of the tub is rough and the surface of the table is also rough, so the two surfaces catch and the tub slows down.

A force is a push or a pull and is measured in newtons. The band pushes the tub, therefore it moves. When a force is applied to an object it can change three things about it.

Aim: To determine the range of forces to be used and to decide the values of the other variables.

Surface area of base: 82cm²

The position on the floor where I placed the chair when I did the experiment the next day would be different to the previous day. The affect it would have on my investigation is that the friction levels will be different as the floor is straighter in other parts. If friction is increased then the distance the tub travels will increase. The tub will travel a smaller distance with high amounts of friction. I would mark around the legs of the chair on the floor where I place the chair in the experiment if I could do the investigation again.

The mass of the tub would be different due to using different weights the next day, would cause a problem. This is as the mass amplifies then the distance decreases. If the mass is decreased then the distance of the tub increases. If I did the investigation again then I would use the same weights and then check that the tub and weights weighed the same as the experiment before.

The distance was affected by the tub lifting into the air when it was forced forward by the elastic band. The amount of friction was therefore decreased and the distance that the margarine tub travelled was greater then it should have been. If I could re-do my investigation then I would do that attempt of the force again.