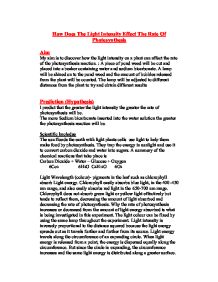 How Does The Light Intensity Effect The Rate Of Photosynthesis

How Does The Light Intensity Effect The Rate Of Photosynthesis Aim My aim is to discover how the light intensity on a plant can affect the rate of the photosynthesis reaction. : A piece of pond weed will be cut and placed into a beaker containing water and sodium bicarbonate. A lamp will be shined on to the pond weed and the amount of bubbles released from the plant will be counted. The lamp will be adjusted to different distances from the plant to try and obtain different results Prediction (Hypothesis) I predict that the greater the light intensity the greater the rate of photosynthesis will be. The more Sodium bicarbonate inserted into the water solution the greater the photosynthesis reaction will be. Scientific knoledge The sun floods the earth with light plants cells use light to help them make food by photosynthesis. ...read more.

Light energy travels along the circumference of an expanding circle. When light energy is released from a point, the energy is dispersed equally along the circumference. But since the circle is expanding, the circumference increases and the same light energy is distributed along a greater surface. Photosynthesis occurs only in the presence of light, and takes place in the chloroplasts of green plant cells. Photosynthesis can be defined as the production of simple sugars from carbon dioxide and water causing the release of sugar and oxygen. The chemical equation for photosynthesis can be expressed as: (light) 6CO2 + 6H2O ( C6H12O6 + 6O2 (in the presence of chlorophyll) The fact that all plants need light in order to photosynthesise has been proven many times in experiments, and so it is possible to say that without light, the plant would die. ...read more.

The range of this factor is 100cms to 5cms and I will repeat the experiment 3 times. To make it a fair test I am going to try and use the same eqipment and and weed, try to keep the temprature the same The apperatus I am going to use are 1 Retort Stand and Clamp 1 Bench Lamp with a 60 Watt bulb 1 Thermomiter 1 Stop Watch 1 Ruler 1 Testube 1 Piece of pond weed Method He apperatus I used is set up below :- First I will set up the eqipment shown above then cut the stem of the Pond Weed under water and put it in the solution then put it in the water+sodium bicarbonate solution then put the bench lamp 100cms away from the weed and started the stop watch and counted the bubbles coming from the stem of the weed over a peroid of 5 minites then repeat the experiment at distances of 60cms, 30cms, 15cms and 5cms. Also recording the water temprature on the thermomiter. Results ...read more.