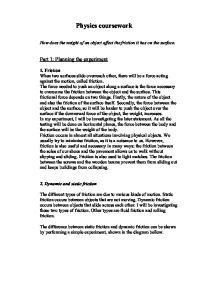 When two surfaces slide overreach other, there will be a force acting against the motion, called friction.

In my experiment, I will be investigating the later statement. As all the testing will be done on horizontal planes, the force between the body and the surface will be the weight of the body.

Friction occurs in almost all situations involving physical objects. We usually try to minimise friction, as it is a nuisance to us. However, friction is also useful and necessary in many ways: the friction between the soles of our shoes and the pavement allows us to walk without slipping and sliding. Friction is also used to light matches. The friction between the screws and the wooden beams prevent them from sliding out and keeps buildings from collapsing.

The difference between static friction and dynamic friction can be shown by performing a simple experiment, shown in the diagram bellow. 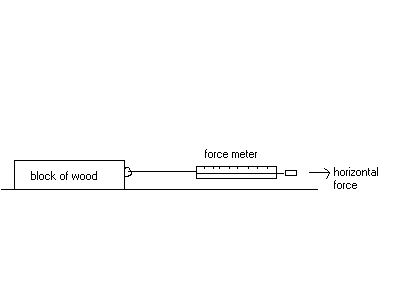 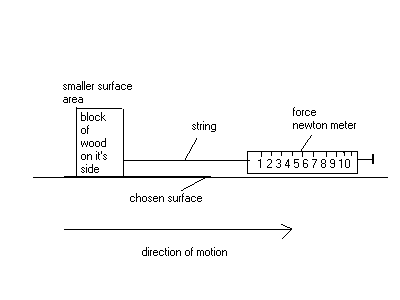 Method: A block of wood will be attached to a piece of string, which will in turn be attached to a force meter. The block will then be pulled along a clean horizontal surface, with the smaller surface area of the block of wood in contact with the chosen surface. The force needed to overcome static and then dynamic friction will then be noted down, this will be repeated 2 times for the sake of averages, accuracy, and to reduce error. The same experiment will be repeated using different surfaces, and the mass of the block of wood will be altered using various weights.

Table of results for method (iii):

The first method gave me, I believe, relatively accurate results, as the coefficients of friction for each surface stay quite the same as the mass of the block rises. The second method however gave me results for which the coefficients of friction fluctuated less than in method (i) when the mass changed of the block rises. In addition, the lines on the graph have a strong correlation (ie the points are close to each other and near to the line of best fit). Therefore I believe it is safe to use this method in the main experiment of the investigation, as it is a more secure method. I have also deduced from my preliminary results, that with the equipment available, the measure of static friction is more reliable and precise. This is because static friction is measured at a precise point in time, whereas dynamic friction must be measured on a longer scale of time. In addition, dynamic friction is harder to record with the apparatus available because the force meter must be pulled along with a steady hand at constant speed for enough time to make recordings. This can prove to be very difficult, and this is why the results for dynamic friction are very unstable and imprecise.

However, through my preliminary results, I have decided that during the main experiment I will use a greater range of weights, to end up with a clearer curve. I have also decided that the weights should start higher (150g) and extend up to a larger weight (950g). This is because the smaller weights used in the preliminary experiments were harder to record, and therefore were not always accurate, and I was more liable to error by using them.

Another factor that I decided from my preliminary results was which surfaces to use. Both the plastic surface of the table and the wood surface, had minimal friction, and therefore they are not very interesting or accurate for measuring static friction. However, I believe it is more interesting to investigate the difference in the three sandpapers available, as I could discover if the size and shape of the granules affects the friction. I am less likely to acquire errors if I measure larger values of  F (N).

From my background and scientific knowledge, but also from the results of my preliminary results, I can predict that as the weight of the block of wood increases, so will the force required to push it along or move it. 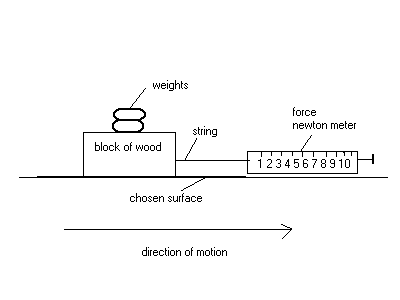 Set up diagram of apparatus

The apparatus shall be set up as shown in the diagram above. A rectangular block of wood will be massed carefully. A piece of string will be attached to it. A force meter will then in turn be attached to the string. The block will then be pulled along a clean, horizontal surface. The force needed to overcome static friction will be noted down. The same thing will be repeated with 7 different masses. These will be 150g, 300, 500, 650g, 800g, and 950g. The mass of the block will be altered using masses of 50g, 100g, 1kg and so on.

The same experiment will be repeated using three different surfaces. This will include 3 different types of sand paper. All the readings will be written down carefully, averages will be calculated and graphs will be plotted for clear analysis of the results.

Each reading will be repeated three times for the sake of accuracy and precision.

In these tables of averages, a column for weight has been added, so as to measure the downward force.

TOTAL AVERAGE PERCENTAGE OF ERROR FOR EACH SURFACE

There were a few other ways of performing the experiment, and other factors that I did not have time to investigate. For example, an incline plane, instead of the horizontal one used in my experiment. The deduction would have been, that as the angle of incline (θ) increased the force (F) would have also increased, until at a particular angle θ, the block starts to move, at this point F is at it’s limiting friction.

I could have repeated my results a further time, to decrease error, and used a more precise range of weights. I could also have investigated other types of friction, not including dynamic and static.