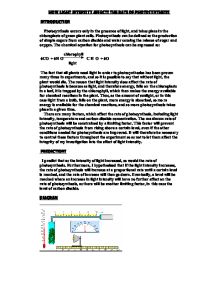 How light intensity affects the rate of photosynthesis.

How light intensity affects the rate of photosynthesis Introduction Photosynthesis occurs only in the presence of light, and takes place in the chloroplasts of green plant cells. Photosynthesis can be defined as the production of simple sugars from carbon dioxide and water causing the release of sugar and oxygen. The chemical equation for photosynthesis can be expressed as: chlorophyll 6CO + 6H O C H O + 6O light The fact that all plants need light in order to photosynthesise has been proven many times in experiments, and so it is possible to say that without light, the plant would die. The reason that light intensity does affect the rate of photosynthesis is because as light, and therefore energy, falls on the chloroplasts in a leaf, it is trapped by the chlorophyll, which then makes the energy available for chemical reactions in the plant. ...read more.

Predictions I predict that as the intensity of light increased, so would the rate of photosynthesis. Furthermore, I hypothesised that if the light intensity increases, the rate of photosynthesis will increase at a proportional rate until a certain level is reached, and the rate of increase will then go down. Eventually, a level will be reached where an increase in light intensity will have no further effect on the rate of photosynthesis, as there will be another limiting factor, in this case the level of carbon dioxide. Diagram Variables Table Variable Type Variable Name Value(s) Reason Input Light Intensity 10,20,30,40,50,60 cm away from test tube. This will provide a good range of results so I can come to a reliable conclusion. Output Amount of Oxygen produced. ...read more.