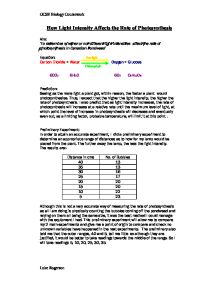 How Light Intensity Affects the Rate of Photosynthesis

How Light Intensity Affects the Rate of Photosynthesis Aim: 'To determine whether or not different light intensities affect the rate of photosynthesis in Canadian Pondweed' Equation: Sunlight Carbon Dioxide + Water Oxygen + Glucose Chlorophyll 6CO2 6H20 602 C6H12O6 Prediction: Seeing as the more light a plant got, within reason, the faster a plant would photosynthesise. Thus, I expect that the higher the light intensity, the higher the rate of photosynthesis. I also predict that as light intensity increases, the rate of photosynthesis will increase at a relative rate until the maximum level of light, at which point the level of increase in photosynthesis will decrease and eventually even out, as a limiting factor, probable temperature, will limit it at this point. Preliminary Experiment: In order to attain an accurate experiment, I did a preliminary experiment to determine an appropriate range of distances as to how far my lamp would be placed from the plant. The further away the lamp, the less the light intensity. The results are:- Distance in cms No. of Bubbles 40 13 35 13 30 16 25 17 20 20 15 20 10 22 5 23 Although this is not a very accurate way of measuring the rate of photosynthesis as all I am doing is physically counting the bubbles coming off the pondweed and relying on them all being the same size, it was the best method I could manage with the equipment I had. ...read more.

This was because photosynthesis needs light energy to produce glucose, the closer the light got to the plant, the faster the plant photosynthesised and therefore as a by-product the more oxygen it produced which were given off as air bubbles. My results showed that the difference between light intensity and the rate of photosynthesis in pondweed are non-linear as they are not stable and in coherence with each other (being that if the light got closer the rate of photosynthesis would increase) but it is erratic so although they do both increase with each other and are not synchronised and so the best we can manage is a line of best fit. However for Experiment 1 you could almost say that as the light intensity increased, so did the Rate of Respiration in proportion. Sodium Bicarbonate played a large part in my results. I used Sodium Bicarbonate in an effort to both make sure there were sufficient Carbon Dioxide levels in the water and to try and keep constant the levels so that each reading would have more or less the same Carbon Dioxide amount to photosynthesise with and only the light intensity changes. This helps me maintain the control variables in order to get a fair and unbiased experiment. ...read more.

This meant that I was relying on them all being the same size so that the results would be equal, which of course was not the outcome. One way I could have more accurately measured the oxygen given off was with a gas syringe. By placing the gas syringe over the beaker, it would have collected all the Oxygen from the plant, which I could then have measured completely accurately. > Different Pondweed Specimens - In each experiment I used a different pondweed specimen for the test. This meant that they were all different sizes. They could also not photosynthesise as fast as each other. One piece could produce many more air bubbles than another one. The way to solve this would have been simply to use the same piece of pondweed each time, and make sure it does not become denatured between experiments. Despite all of these variables making it a very inaccurate experiment, I thought there was enough evidence to support my original hypothesis. I could possibly have made it more accurate towards the start by taking many more readings using the same piece of pondweed each time and then calculating an average, however due to time restrictions and the equipment at my disposal, this was the best experiment I could manage. ?? ?? ?? ?? GCSE Biology Coursework Luke Rogerson ...read more.