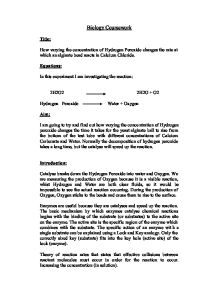 How varying the concentration of Hydrogen Peroxide changes the rate at which an alginate bead reacts in Calcium Chloride.

Biology Coursework Title: How varying the concentration of Hydrogen Peroxide changes the rate at which an alginate bead reacts in Calcium Chloride. Equations: In this experiment I am investigating the reaction: 2H2O2 2H2O + O2 Hydrogen Peroxide Water + Oxygen Aim: I am going to try and find out how varying the concentration of Hydrogen peroxide changes the time it takes for the yeast alginate ball to rise from the bottom of the test tube with different concentrations of Calcium Carbonate and Water. Normally the decomposition of hydrogen peroxide takes a long time, but the catalyse will speed up the reaction. Introduction: Catalyse breaks down the Hydrogen Peroxide into water and Oxygen. We are measuring the production of Oxygen because it is a visible reaction, whist Hydrogen and Water are both clear fluids, so it would be impossible to see the actual reaction occurring. During the production of Oxygen, Oxygen sticks to the beads and cause them to rise to the surface. Enzymes are useful because they are catalyses and speed up the reaction. The basic mechanism by which enzymes catalyse chemical reactions begins with the binding of the substrate (or substrates) ...read more.

* The shape of the measuring cylinder must be kept the same otherwise the alginate b***s would travel different distances. * The size of the yeast beads must be kept the same. * The height I drop the beads at must remain the same otherwise the distance that the bead has to travel will be faster for different beads. Independent Variable: During the experiment, I changed the concentration of both hydrogen peroxide and water. Concentration of Hydrogen Peroxide (%) Concentration of Water (%) 100 0 90 10 80 20 70 30 60 40 50 50 40 60 30 70 20 80 10 90 Dependant Variable: I measured the time it took for the bead, after being dropped into the hydrogen peroxide and water solution, to sink to the bottom of the test tube and rise again to the top. The bead rises due to the production of Oxygen (O2) bubbles surrounding the bead. Apparatus: Diagrams: Making the beads Timing the rising of the beads List: * Alginate * Water * Yeast * Measuring Cylinder * Hydrogen peroxide * Syringe * Calcium chloride solution * Sieve * Plastic spoon and cup with punctured holes added * Glass rod * Stop clock * Tweezers Method: The Making of the Yeast Alginate b***s: * First of all I placed 3ml of alginate preparation into a small beaker. ...read more.

40) then follow it along to the Y axis and read the result and then do the same twice as far up the X axis (e.g. 80) the number you get on the Y axis should be double the previous number. I have highlighted this on the graph to show that the results are correct to my prediction. The results turned out this way because of the particle collision theory that states that if there are twice as many particles there is twice the probability that the particles will collide. Therefore if there are half as many there is half the probability that the particles will collide. I could make this experiment better by making more accurate measurements. For example if I measured every alginate ball and weighed them to make sure all the b***s are the same the results are likely to be more accurate. Also if I repeated the results many more times I would get a more accurate set of results. Another important factor to consider is that Human accuracy in measuring the time is not terribly accurate. You could make your results more accurate by using light gates to sense the alginate b***s passing certain points (Top and bottom). By looking at my graph I think you can see that my results are good enough to support my conclusion. ...read more.