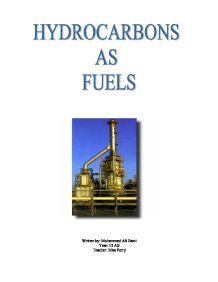 Written by: Mohammed Ali Zaini Year: 12 AS Teacher: Miss Perry Introduction Hydrocarbons as Fuels Crude oil/Petroleum Petroleum is another name for crude oil. Its name refers to the fact that it occurs naturally Pockets within rocks; the word petroleum means 'rock oil'. Crude oil in its natural form is a thick, tarry substance that is difficult to ignite. In its raw state it isn't very useful; it needs to be processed to separate out its most valuable constituents such petrol, lubricating oils, heating oil and power station fuel. Crude oil is also the source of the raw materials used to make detergents, plastics, paints, antifreeze, synthetic rubber and medicines. Seventy per cent of organic chemicals are produced from crude oil and a massive 3000 million tonnes of crude oil products are used worldwide every year. Where does crude oil come from? Over 400 million years ago, much of the Earth was covered in sea. Life had envolved but it consisted of primitive cells such as bacteria algae and single-celled animals and plants. There were no larger organisms; this was 200 million years before the appearance of the dinosaurs. Although the individual organisms were small, there were vast numbers of them and they grew and reproduced rapidly in the warm oceans. As they died, they sank to the bottom and formed thick layers of decomposing organic material. Over many years, layers of sediment built up on top of this organic layer and it eventually formed sedimentary rock. During the early stages, bacteria that were able to survive without oxygen continued to break don the organic material in the layer. Over millions of years, the high pressures created by the weight of the overlying layers and the high temperatures generated by decomposition converted this layer of biomass into crude oil and natural gas. The liquid crude oil seeped into porous rock deposits above. If only porous rock was present, the oil could get up to the surface, forming shallow lakes. ...read more.

Under these conditions, high-molecular-mass alkanes are broken down into low-molecular-mass alkanes as well as alkanes. Both C-C and C-h bonds are broken in the process. As the bondbreaking is a random process, a variety of products, including hydrogen, are possible and some of them intermediates can react to produce branched-chain alkane isomers. For example a possible reaction for decane is: The chemical industry uses alkenes such as ethane for a variety of products ( for example, poly9ethene0 from ethene0. 2,2,4-trimetylpentane is an important component of petrol). In the catalytic cracker the hot, vaporised oil fraction and the catalyst behave as a fluid. The seething mixture is called a fluidised bed. Some of the hydrocarbon mixture is broken down to carbon, which blocks the pores of the catalyst. The fluidised bed of the catalyst is pumped into a regeneration chamber, where the carbon coke is burnt off in air at a high temperature, allowing the catalyst to be recycled.Reforming Reforming involves the conversion of alkanes to cycloalkanes, or of cycloalkanes to arenes. Reforming reactions are catalysed by bimetallic catalysts. For example, a cluster of platinum And rhenium atoms is very effective at removing hydrogen from methylcyclohexane to form methylbenzene. A catalyst containing clusters of platinum and iridium atoms enables conversion of straight-chain alkanes to arenes. These metal clusters are between 1 and 5 nm in diameter and are deposited on an inert support such as aluminium oxide. The rhenium and iridium help prevent the build-up of carbon deposits, which reduce the activity of the catalysts. Isomerisation Isomerisation involves heating the straight-chain isomers in the presence of a platinum catalyst. The resulting mixture of straight- and branched-chain isomers then has to be separated. This is done by using a molecular sieve, which is another type of zeolite that has pores through which the straight-chain isomers are too bulky and thus are separated off; the straight-chain molecules are recycled to the reactor. ...read more.

-Advantages: renewable; pollution- and waste free; can be used in locality where energy is needed. -Disadvantages; high initial expense for large-scale generation of electricity; not a reliable source in calm weather. Moving water Hydroelectricity: water stored behind dams or from waterfalls can be released through turbines and generate electricity or be used directly to turn wheels in mill. Hydroelectricity is a major source of power in many countries. Waves: the motion of waves is used to cause oscillation motion in various devices and to generate electricity. Tides: Incoming in rivers estuaries fill up large water stores behind barrages across the river. The water can be released through turbines to generate electricity. -Advantages; renewable; quite predictable; pollution-and waste-free; can be used on large scale. -Disadvantage: costly to install; environmental impact of dams and barrages. Sunlight: solar heating and photovoltaics Solar panels, which are panels of solar heat collectors, are used to heat water in parts of the world where sunshine plentiful. Photovoltaic cells convert light into electricity. In future, large satellites may generate electricity and beam energy by microwave to Earth: -Advantages: renewable; pollution-free with no waste products. -Disadvantages: low sunlight levels in UK; none at night; photovoltaics have high initial costs; very large arrays needed for large scale production of electricity. Geothermal: hot rocks Some distance belowthe surface of the Earth, the temperature is high (about 85�C at 2 km below). Water pumped into wells in the hot rock zone is heated; the extracted hot water can be used to heat buildings. -Advantages: almost unlimited source. -Disadvantages: not widely available; expensive initially; technological problems. Hydrogen Many scientists believe that we should run a 'hydrogen economy'. Hydrogen can be extracted quite cheaply from water by electrolysis. Much scientific and technological effort is being spent on effective storage and transport systems. -Advantages: no pollution; as water is the only waste product from burning hydrogen in air; available in large quantities. -Disadvantages: regarded as too dangerously explosive by many people; difficult to store and use for transport or in domestic situations. ...read more.